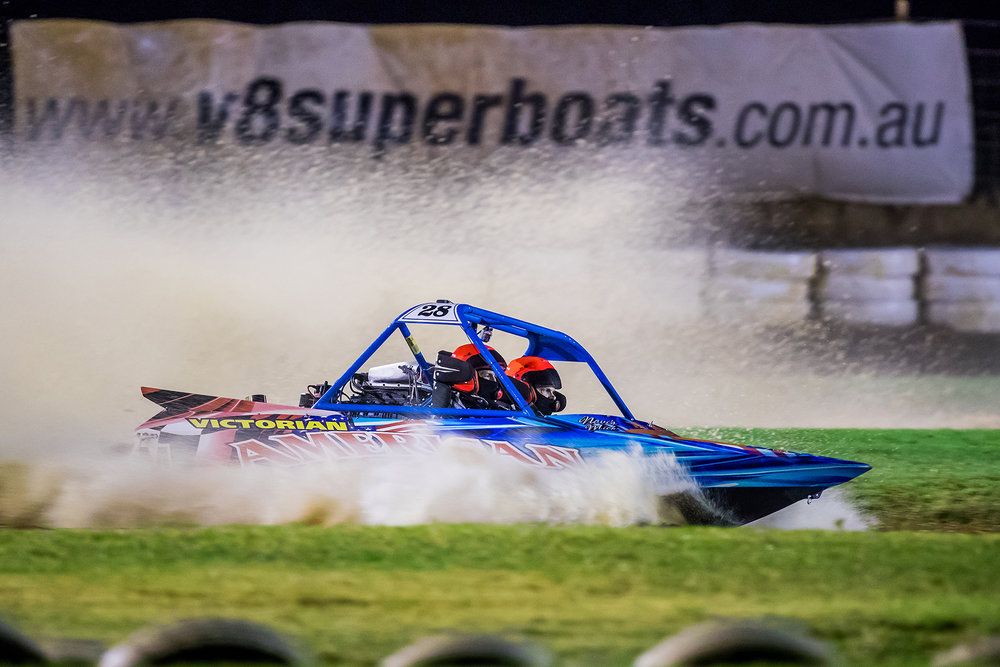 Griffith is to V8 Superboats what Bathurst is to Supercars – it’s unforgiving, it’s tight and it’s not for the feint of heart. Many a V8 Superboat has traveled to Lake Wyangan and never returned, one reason why the very name of the circuit strikes fear into so many – the very same reason the venue is always packed, especially under lights as darkness descends.

This year will be no different, especially as the title race has become the most hotly contested battle in recent years, both Unlimited Class – which has been the sole domain of Victorian Phonsy Mullan for four consecutive seasons – and 400-Class have never been so close with mere tenths of seconds keeping teams off the podium – so the fans will be in for a night to remember.

There may be a couple of vacancies this year, with increased work commitments the main reason for the absences, but there will be some good additions too, notably former 350-Class champion Daniel James who will ‘B’ drive the Outlaw Team Spitwater entry of Justin Roylance, a package which the Victorian was instrumental in setting up with brother Brad James through JRE Race Engines.

12-months ago Phonsy Mullan was forced to use two boats to take the win at Griffith, his all-conquering twin-turbo machine suffering a mechanical issue in qualifying, but typical of the GM Motorsport team-boss, a change to his naturally-aspirated 500ci V8-powered machine did little to slow him down, the 5-time Australian champion going on to comfortably defeat West Australian Jamie Welch and Darek Sygidus in the final.

Mullan will employ the services of his naturally-aspirated machine once more at Griffith, but this time he will face a determined Tremayne Jukes. Driving the thunderous 1300-horsepower twin-turbo ‘Maniac’, Jukes has taken the top step of the podium twice in two rounds to lead the championship points over Mullan, a situation the ‘RAMJET’ pilot hasn’t faced in five seasons.

Whilst Mullan will present no easy challenge, Jukes admits that the greatest threat to a three-peat is the circuit itself.. “Griffith is unforgiving and at this level you’re always just millimetres away from what could be a big accident, so there’s a certain level of caution you need to employ. We’ve seen it year in and year out, an off at Griffith can be fatal to your championship hopes, so it’s a matter of balancing that fine line between success and game-over. 1300-horsepower might be nice on a long wide straight, but there’s not too many of them in Griffith, so it’s going to be a matter of managing the beast and keeping it straight.

“It’s quite likely Phonsy’s boat will be better suited to Griffith than ours, but I thought the same about Keith and we came out on top there, so I won’t give up easily, but it will be tough to take three wins in a row!”

Season 2017 might be playing out as a battle-royale between Jukes and Mullan, but they won’t be the only ones vying for victory. Two-time champion and former Griffith winner Daryl Hutton has had a horrid start to the season, dialing in a new boat which so far at least, has failed to respond to all efforts to make it sit right in the water – one of the secrets to making a V8 Superboat go fast. The New Zealander has been competing for long enough that the issue will not be ongoing, and there’s every chance the last three weeks has seen some pretty intense ‘tuning’ of the new hull to make it work, so keep an eye on the #28 Unlimited machine because either way, he’ll be right on the ragged edge.

Always tough competitors, brothers Ted and Darek Sygidus – both former Australian champions – have not enjoyed a particularly easy couple of seasons with their two ‘Frankenzstain’ machines, but last time out in Keith, Ted made the podium and threw down a stunning lap in the final, a lap that on merit may have been good enough for a victory, before both Mullan and Jukes stepped it up another gear. Neither of these two guys scare easily, and they will fight back at Griffith against everything the track throws at them, an approach which has netted them success before, but as Tremayne Jukes rightly admitted, it’s a fine line…

Adelaide’s Mick Carroll is another that always excites, and this weekend he’ll be alone, team-boss Tony Giustozzi one of those caught up with other commitments, so Mick will be able to set the boat up to suit his style, and on his day, that style is as good as anyone!

Add in Glenn ‘Spider’ Roberts who impressively holds down third in championship points behind Jukes and Mullan, and Canberra’s Paul Burgess and you have a very competitive Unlimited field all looking to stake a claim on the points table as they head towards the mid-season break.

In 400-Class perhaps the biggest surprise is that co-points leader and reigning champion Brett Thornton will be absent from the event. A winner during the opening round in Temora, Thornton could manage only third at Keith with the rise of former 350-Class front-runner Ben Hathaway – the young Victorian reveling in his new Sprintec machine and clearly the class of the 2017 field.

Hathaway was a standout from the opening round in Temora where only a freak electrical issue kept him from victory, before demolishing the field at Keith during practice. In the final the only one to get close was Superboat veteran and multiple Australian champion Mark Garlick. ‘Grumpy’ has seen victory at Griffith before, a venue where experience will come into play, so the battle for the top of the timesheets should be interesting.

They won’t be the only ones though, Daniel James is a former winner at Griffith and he too is expected to apply pressure to the leaders, although unlike his prior experiences, this time he’s driving as ‘B’ driver with Outlaw Team Spitwater team-leader Justin Roylance in the JRE-powered machine.

Roylance too will be quick and looking to learn what his new package for season 2017 is capable of, but he – like everyone else in the field – will respect the circuit and balance bravado with ambition, another fine line the V8 Superboat field will have to tread.

LS-Class too will be back in action with Ivan Safranek leading the points ahead of father-and-son combination Graham and Kyle Reynolds, all three crews are Griffith rookies, so they will have their work cut out for them.

Bottom line is that Griffith under lights at Easter is an event to behold – it will be fast, it will be furious and you won’t want to miss it.. Game on!

The third round of the Australian V8 Superboats Championship will be a single-day event at Lake Wyangan, with gates opening at s:00pm with qualifying rounds getting underway at 3:00pm. The circuit is located at the Griffith Boat Club, off Lakes Road (via Borga Road or Kidman Way), 10-kilometres north of the city.

Tickets are available at the gate.

For those of you unable to make the event, this weekend a range of interviews and videos will be made available via www.facebook.com/V8Superboats where results and updates will also be posted, but if you live in the area, do yourself a big favour, and drop down to Lake Wyangan to take in some of the action live, you certainly won’t be disappointed!