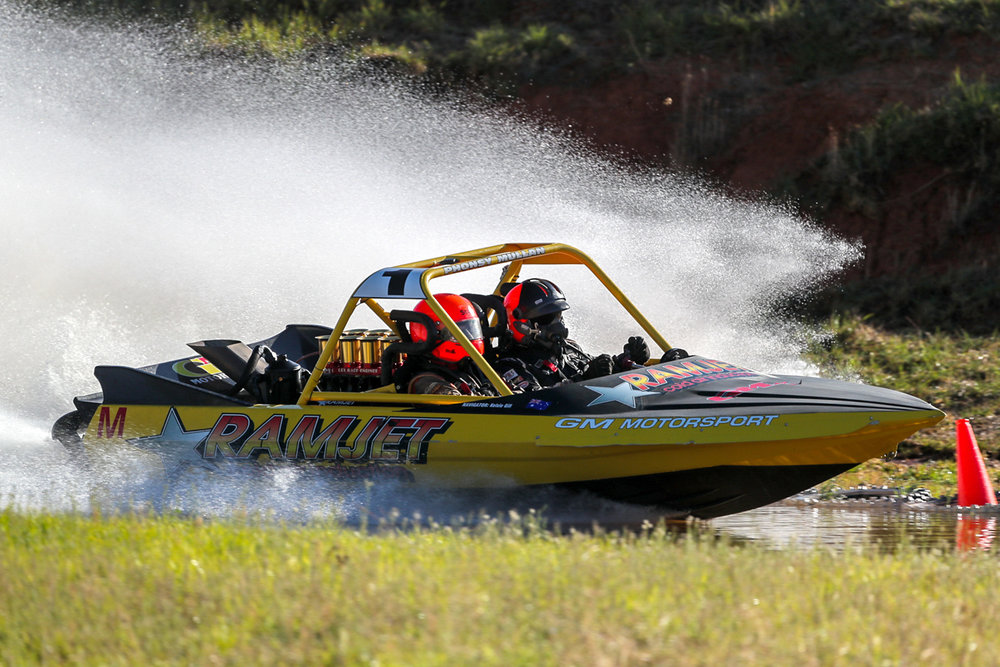 After three events down south, the Australian V8 Superboats Championship heads north ahead of the onset of winter for the fourth round of the 2017 season at the Tweed Coast venue at Cabarita Beach on the far north coast of New South Wales.

Always a popular destination amongst competitors, Cabarita also presents a regular challenge with its great selection of demanding rotations, some of which have delivered the biggest offs in the sport’s history – Tony Giustozzi’s dramatic exit from the circuit in late 2015 proved an online sensation for tens of millions of viewers worldwide.

The story of the Cabarita weekend though won’t be about out-of-water excursions – not this year – rather the emerging battle for supremacy between Unlimited Superboat stars Tremayne Jukes – who leads the championship points – and four-time back-to-back Unlimited champion, Phonsy Mullan.

Jukes has been the revelation of season 2017, the Victorian entering the opening round behind the wheel of one of the most successful boats in the sports history – Dean Finch’s mighty 1300-horsepower twin-turbo V8 powered ‘Loose Cannon’. Appropriately renamed ‘Maniac’ and with Jukes inserted in the driver’s seat, the combination has gone on to claim two outright wins to start the year, one at Temora, the other on debut at Keith in South Australia.

For Mullan – who has switched (temporarily) to a naturally aspirated LS527ci V8 powerplant this season – the five-time Superboat champion claimed back some honour over Easter on the demanding Griffith layout, with Jukes hanging on for second, the two Victorians turning on a fantastic show across the three rounds to date and they are expected to deliver even more action at Cabarita.

They won’t be the only ones either. Former 400 Class champion Ted Sygidus has been creeping closer and closer to the points leaders over recent rounds, and he is enjoying the taste of podium success, but wants more. So too the ‘Excalibur’ pairing of Tony Giustozzi and team-mate Mick Carroll, the two South Australians have been race winners in the past, and they are always exciting to watch at Cabarita, they will be looking to get their championship back on track across the weekend.

Two-time Australian champion Daryl Hutton too is another to keep an eye on. Season 2017 has not been kind to the Australian-based New Zealander, with a new package from NZ falling well short of what Hutton was hoping for. At Cabarita there is no question he will bring something special – as to whether the dramatic changes the team have made to the boat since Griffith work, that will very quickly be clear, and could go either way!

Glenn ‘Spider’ Roberts has been one of the revelations of the 2017 season, the former 350-Class star has been super-consistent in his big-block V8 powered ‘Blown Budget’ the Victorian currently sitting third overall in championship points thanks to his ongoing consistency. He’s also done plenty of miles at Cabarita in recent seasons and will put that experience to good use across the weekend.

In 400-Class the champions will return to the fray at Cabarita after a sabbatical from the championship last time out at Griffith – reigning champion Brett Thornton and 2015 champion Mark Garlick will be back and looking for glory on what is considered the Queenslander’s ‘local circuit’, but they will have their work cut out for them with the current performance of former 350-Class driver Ben Hathaway.

Like Tremayne Jukes in the Unlimited class, Hathaway elected to buy a boat with a strong pedigree then use that to work himself into title contention. In Hathaway’s case, he took delivery of the boat that took ‘Princess’ – Brooke Avenell [Dixon] – took to multiple Australian title wins before her retirement from the sport. Hathaway took up the reigns at the start of the season, and his pace has been incredible, often circulating so much faster than his 400-Class rivals that he could qualify for the top four or five in the Unlimited class!

Whilst Hathaway has been quick, he’s also failed to finish on a number of occasions with teething issues, and last time out at Griffith that was all the incentive Queenslander Paul Kelly needed as he claimed his first ever victory in Superboats to climb up to second in the championship, just six points behind Hathaway.

Also moving forward in the championship is Spitwater Team Outlaw’s Justin Roylance, the man from Forbes in NSW also debuted a new machine at the start of the 2017 season, but a technical issue with the 400-Class machine sidelined him ahead of the opening round at Temora, forcing Roylance onto the back foot. He has been playing catch up ever since, but two podiums at Griffith for he and team-mate Daniel James have put the Spitwater supported machine right in the title race.

Reigning AUS#2 Jody Ely will also keep the points leaders honest, especially as he is just three points shy of Kelly for second overall, whilst 2016 Griffith winner Brad Marsden and experienced Superboat campaigner Greg Harriman in the ‘Pink Boots Foundation’ machine will be sure to make their presence felt.

LS-Class too will be back in action with Ivan Safranek leading the points and looking for an extension of that advantage over the Cabarita weekend.

The fourth round of the Australian V8 Superboat Championships gets underway at Round Mountain Raceway (320 Round Mountain Road, Cabarita Beach) on Saturday 27 May, with practice and two qualifying sessions taking place from 11:00am, ahead of three more qualifiers and the finals on Sunday, 28 May with gates open at 8:30am.

For those of you unable to make the event, this weekend a range of interviews and videos will be made available via www.facebook.com/V8Superboats where results and updates will also be posted, but if you live in the area, do yourself a big favour, and drop down to Round Mountain Road, Cabarita Beach to take in some of the action live, you certainly won’t be disappointed!

PrevPreviousMullan returns first, whilst Kelly takes spectacular victory at Griffith
NextJukes makes it three from four, whilst Thornton on top in 400’sNext