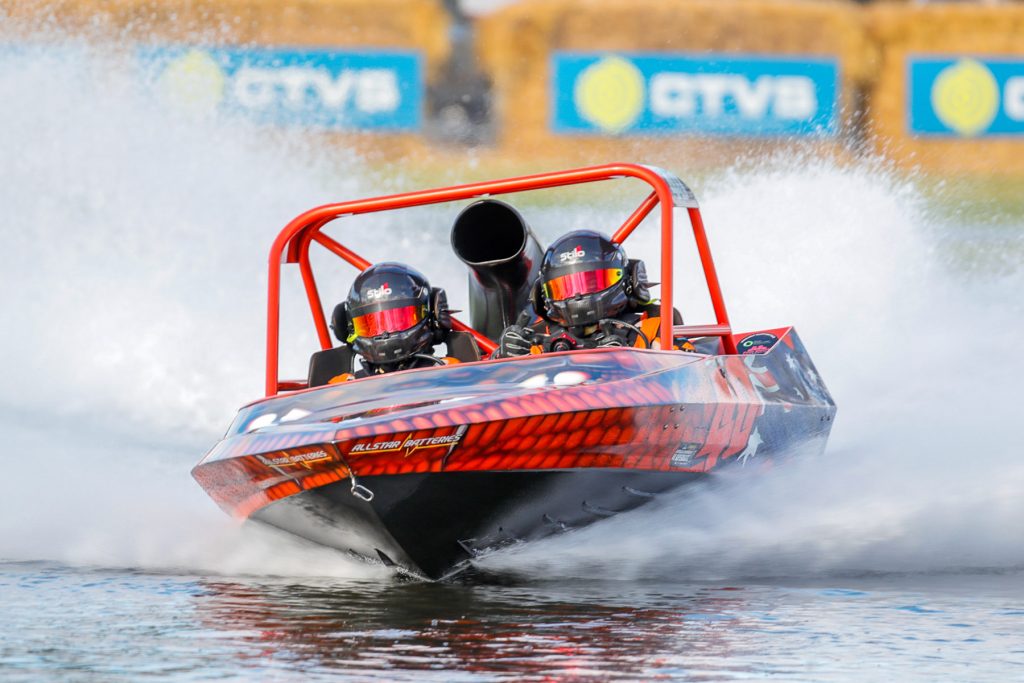 The Penrite Australian V8 Superboat Championships received unprecedented television exposure during the 2019 season, coverage which saw the sport beamed onto television screens around the world and onto airlines flying across the globe.

That exposure reflected the 2018 relationship between the Australian Formula Jet Sprint Association [AFJSA] and Beijing’s China Television Service Co Ltd [CTVS] who produce the bulk of the motorsport coverage across Asia.

CTVS CEO Gernot ‘Berti’ Kuntze initially came across V8 Superboats two years earlier after discussions with their Creative Director Sean Henshelwood, who is also responsible for the media exposure of this incredible form of motorsport in Australia.

“I couldn’t believe what I was watching when I first saw it, I thought it had all been put on fast forward,” Kuntze admitted. “Imagine a machine that can accelerate faster than a Formula One car on water, then turn at up to 6Gs without slowing down, then put the whole circuit in a field not much bigger than a football pitch and watch it all unfold against the clock – it’s insane!”

During the 2018 season in Australia, CTVS filmed and produced four 30-minute programs across eight events which also included a UIM internationally-sanctioned World Series event contested across two races in late 2018 between Australia, New Zealand (who invented this crazy sport) and the USA.

From the get-go, the V8 Superboat programs were very well received, the reaction to this incredible motorsport category seeing the first two half hour programs distributed across Asia to a market in the hundreds of millions of homes, whilst also being shown locally in Australia on Fox Sports across the summer holidays.

With two more programs from the 2018 Penrite UIM World Series due for delivery in coming weeks, and two more programs scheduled for the 2019 Penrite Australian Championships, the profile of the sport will continue to grow, with more and more networks including North America and Europe expected to join the distribution list this year.

For CTVS, an involvement with V8 Superboats allows China’s leading independent production house to give something back to motorsport, a sport with which they have become synonymous across the Asia-Pacific region.

“For the last five years CTVS have been the leading technical and production partner of the top motorsport championships in Asia,” Kuntze explained. “We also understand – especially on the forefront of the emerging Asian market – that sometimes developing categories need support, and we were happy last year to help give V8 Superboats that opportunity to increase their reach.

“Personally, I think it’s one of the most dramatic forms of motorsport I have ever seen, and the feedback from everyone we have shown the footage to only further reinforces that, it just needs a bigger audience, so if we can help facilitate that to ensure the relationship continues into the future, then we will do everything we can to keep supporting V8 Superboats.”

Whilst he wasn’t able to confirm too many details, Kuntze also let slip that a new opportunity to promote motorsport on networks across Asia in 2019 might well provide V8 Superboats with another chance to broaden its reach.

“We have in place some very good opportunities to take motorsport to a whole new level in 2019, one of the most exciting coming in China where I think V8 Superboats would be well received. It is a country with the world’s largest population, and a country that only now is starting to discover motorsport, and I think the nature of V8 Superboats would prove very popular. Like all things in this part of the world, progress is conservative, but if we continue to make forward steps, then we will all be much better placed when the sport ultimately takes off.”

About CTVS:
CTVS is based in Beijing, with representative offices in Hong Kong and Germany. With over ten years of experience spanning across live production, corporate videos, news reporting and media distribution, CTVS has strategic partners across most verticals.

CTVS also has an extensive array of equipment and facilities, from state-of-the-art OB vans to broadcast cabins [MPU] – which are designed be quickly transported around Asia – to outside broadcast vans based inside China, and Beijing-based edit suites capable of delivering cutting-edge television to client and network requirements.

CTVS staff have extensive experience in motorsport over more than ten years in Asia, and employ the services of professional media personnel to assist in providing the highest quality productions for clients.

That experience, in what has been an ever-changing market, together with their ability to quickly activate and provide services on the ground, has seen CTVS emerge as the leading service-provider for motorsport television in Asia.
www.chinatvservice.com
#ChinaTVService