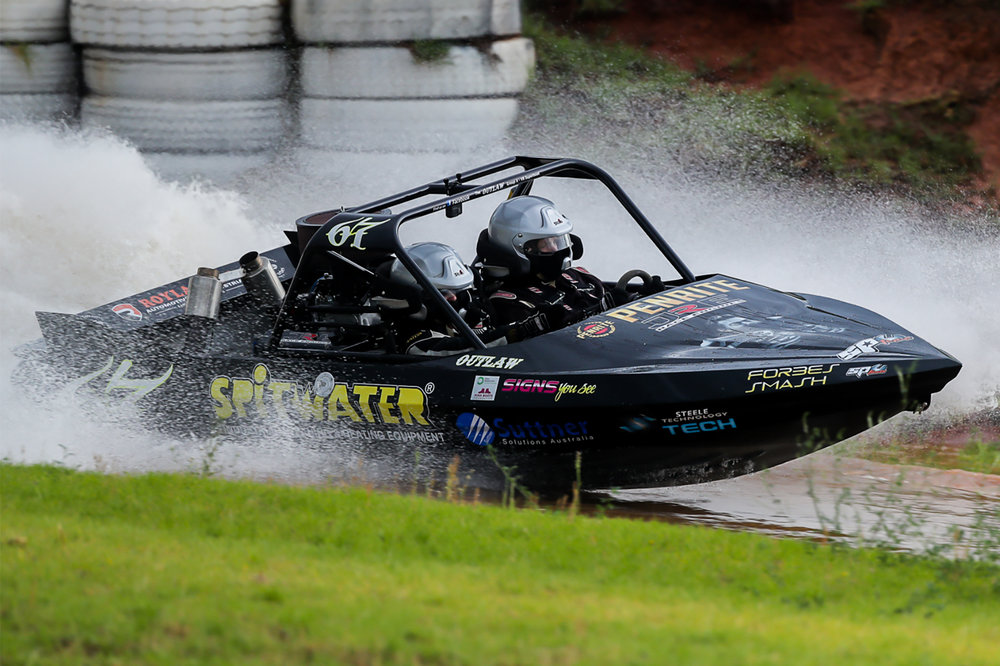 The Penrite Australian V8 Superboats Championship returns to Keith in South Australia this weekend for the second event of the season at a venue that proved extremely popular with teams and fans on it’s debut in early 2017.

Keith has been such a success since it was first introduced last year, that it will host one of two rounds of the Penrite UIM World Championships later this year, but for the coming weekend it will play host to one of the biggest fields of V8 Superboats in recent seasons, with an impressive list of 33 teams entered for round two.

UNLIMITED SUPERBOATS
Leading the charge will be the Unlimited Superboat field, with 17 teams entered, led by six-time Australian champion Phonsy Mullan. The Victorian is yet to make a decision on which boat he will enter in the Keith round, having had a challenging debut with his ‘new’ package at Griffith a month ago, where he spent much of the evening chasing fuel pickup problems on his way to second overall in the weather shortened event.

Campaigning a Sprintec hull he’d picked up from another team late in 2017, Mullan fitted his world-standard 527ci naturally-aspirated alloy V8 to the hull, and showed in the limited runs he had, that the package was still capable of winning races, but as he had been in 2017, he was thwarted by twin-turbo power, this time in the shape of Temora’s Scott Krause.

That has prompted Mullan to speed up the redevelopment of his own twin-turbo unit, a package he’d used in past seasons with great success, and to bring out his championship winning hull, giving the RAMJET driver two potential options for Keith.

He knows though that he’ll have his work cut out for him, especially with the addition of his 2017 title rival to the field.

Having been forced to move ‘Maniac’ on at the end of last season, Tremayne Jukes and his team assisted new owner Paul Gaston to an impressive fourth place at Griffith in it’s new guise as ‘Heatseeker’. Gaston will be back for Keith, but Jukes will also be in the seat as the ‘B’ driver, and he’s keen to make it back-to-back wins at Keith.

Likewise Scott Krause who impressed everyone with his performance at Griffith in the ‘Penrite KAOS’ machine, a package built originally for Wagga’s former world champion Slade Stanley – however despite leading the Unlimited Superboat points, Krause will be one of few rookies at Keith, so will start a little behind the eight-ball.

One team returning though that does have Keith experience, is the ‘Frankensztain’ crew of Ted and Darek Sydgidus with a package that has already proven successful in New Zealand over the off-season.

Third last time out at Keith behind Jukes and Mullan, Ted Sygidus has been a regular on the podium in the New Zealand championship, whilst younger brother Darek has often been the pace-setter with some of the fastest recorded times during their cross-Tasman cameos. Their newly developed Peter Caughey ‘tuned’ Sprintec S3 features their naturally-aspirated 680 cubic-inch alloy big block V8, an engine which has so far proven the goods against the might of the array of twin-turbo V8 machines in New Zealand, making the Sygidus team one to watch this weekend.

Throw in Griffith podium finisher Glenn ‘Spider’ Roberts in his recently rebuilt (and more powerful) big block ‘Blown Budget’ and the returning ‘Excalibur’ crew of Tony Giustozzi and Mick Carroll, and you have a play-list of stars likely to keep the fans on their feet for much of the day.

For former champion Daryl Hutton, Keith may well serve to be the final chapter in the life of his time working on the ‘American Automotive’ machine, the team making dramatic changes to the Stinger hull they’d bought new for the start of the 2017 season. Almost a year and a half into the development of the hull, no-one has been able to dial out the evil tendencies of a boat that looks intent on ejecting Hutton and navigator Mick Parry from the water at almost every turn.

A dejected Hutton admitted prior to Keith that he was going to give the package one last try before turning it into a garden decoration, with some further dramatic changes to the setup, the ex-pat New Zealander confirming he’d relocated the engine and the rollcage so far back that he was still engineering engine mounts and driveshafts just days out from the second round.

Jeremy Kincaid had a tough run in ‘Rogue’ at Griffith, but he will be looking to find his strong 2016 form again at Keith despite a less than ideal debut at the venue last year (rolling the boat into the water at the start of the day), whilst Sprintcar driver Michael Cunningham will be looking to add to his solid debut at Griffith in the ex-Phil Dixon Sprintec.

Daniel deVoigt too will be looking to add to his Griffith form, which saw the Queenslander finish the event inside the top five, whilst West Australian Simon Cain will share driving duties in ‘Quality Time’ with former national championship regular Cheryl Welch.

Sadly Cheryl’s ‘B’ drive in a WA boat means that the ‘Natwel Racing’ machine is still not yet set for it’s return, complete with new 427ci LSX twin-turbo, leaving Jamie Welch to sit out another round as the team finalise a few technical issues with the new engine in preparation for a debut later in the season.

400-CLASS (International Group A)
Like the Unlimited Superboats field, 400-Class too is well represented, with 16 boats and no less than five national champions including reigning champion and points leader Ben Hathaway who just happens to be the 2017 winner at Keith..

Hathaway took victory in the 2017 championship by just a single point over 2016 champion Brett Thornton, with the Keith win integral in that victory. The Victorian was the standout at Keith last year, qualifying a staggering 2.2-seconds faster than 2015 champion Mark Garlick, before completing the finals undefeated with a time in the top three almost a second and a half faster than Garlick with Thornton third.

At Griffith a month ago, Hathaway was again quick, but he was forced to dig deep in the finals to counter the pace of Queensland’s Paul Kelly and reigning AUS#4 Jody Ely, his margin of victory over Kelly in the final, just six one hundredths of a second..

This weekend he will also have another driver to keep an eye on, with former 350-Class champion, and a race winner in 400-Class – Daniel James – back in the JRE Race Engines machine, he will be one to watch.

West Australian Shane Francis (Auzzie Apocolypse) too could provide the drivers from the east a challenge or two, the points leader and likely 2018 champion is keen to get some runs on the board ahead of an appearance in the forthcoming UIM World Championships, for which Keith is one of two venues.

Likewise Shane Loughnan (Vicious), a former winner in 400-Class who is making his return to the championship in preparation for the Worlds. He had a tough time of it technically at Griffith, but will be looking to make amends at Keith.

2016 ‘Rookie of the Year’ Mitch Roylance (Black jack) will be looking to upstage his brother Justin on his maiden run at Keith, although ‘Spitwater Team Outlaw’ driver Justin Roylance – who was instrumental in attracting Penrite to the sport – will be looking to get his championship on track as he looks to be competitive for the World Championships in late October.

Throw in Greg Harriman and ‘Pink Boots Racing’ team-mate Hugh Gilchrist, Brad Marsden (Allcott Transformer), the returning Sam Everingham (Arkham Asylum), Andrew Medlicott (Gone Nutz Again) and Darrin Kesper (Let’s Boogie) and you have another reason to make sure you’re on the fence at Keith this weekend, because it is likely to provide one of the most competitive fields in recent years!

The second round of the 2018 Penrite Australian V8 Superboat Championships will run within the annual Keith Diesel & Dirt Derby at the Keith Showgrounds, so the timeframe will also include other events on the day, with an early start on Saturday morning and two mid-session breaks for other activities. The Keith Showgrounds are located on the north-eastern side of Dukes Highway off Emu Flat Road.

Qualifying heats will begin on Saturday from 8:30am, with the finals underway after the second of the long breaks at 3:00pm.

PrevPreviousV8 Superboats to take Penrite to the World[s]..!
NextPenrite V8 Superboats title fight to heat up under lights in TemoraNext