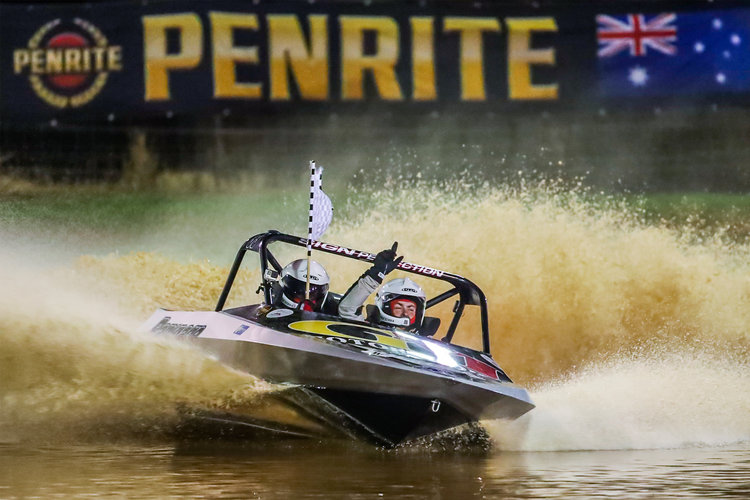 The Penrite Australian Superboats Championship rolls into Cabarita this weekend for the fourth round of the season with an epic field of entries – the biggest this year – many of whom are preparing for the forthcoming World Series in late October, with the Tweed Coast Jetsprint facility one of two venues to feature in the two round UIM-sanctioned event.

All the leading Australian teams are entered for the weekend, alongside one of New Zealand’s top guns, Rob Coley, which for the fans means two days of fast edge-of-the seat racing.

Temora’s Scott Krause leads the way in the Unlimited class, the ‘KAOS/Penrite’ driver having claimed three dominant wins from three starts in season 2018, making him the target of the 13 other Unlimited teams entered, whilst in 400-Class, Jody Ely’s maiden season win at Temora last time out sees him start one of the favourites, but with as many as ten potential top point scorers in the field – and six former champions – anything could happen..

UNLIMITED SUPERBOATS
Scott Krause’s impressive undefeated run in a class that has been dominated in recent years by Melton’s Phonsy Mullan has been the standout result of the Unlimited Class this year, elevating the quietly spoken New South Welshman to crowd favourite, but as popular as he has become, he will have a big job on his hands this weekend.

Mullan has had a hit-and-miss season, with a number of setbacks across the year as he has worked to develop a new package for the World Series, and whilst behind on points, he still holds second and knows that Krause is only one tough weekend away from losing the points lead. He also knows that the Cabarita round will present Krause with his biggest challenge to date – a full field of ‘healthy’ teams all looking to stake their claim ahead of the world titles.

Cabarita will see the much anticipated return of West Australian Jamie Welch and the Natwel Racing team entry that is sporting it’s new 427 LSX twin-turbo V8 powerplant. Welch has shown impressive pace in past seasons, ahead of adopting an all-new engine package for 2018, something which has seen the team sit out the first half of the year in an effort to test and resolve any likely issues before their World Series assault.

An unknown ahead of Cabarita, Welch could well be the joker in the pack, but he won’t be alone.

Tony Giustozzi and Mick Carroll will be back behind the wheel of ‘Excalibur’ looking to cement their position in the Unlimited field. The two drivers share the mantel of the most spectacular and most watched out-of-water experiences in the modern history of the sport globally, but they’re also renowned for their raw speed, and are often the only thorn in Phonsy Mullan’s side – they could well provide the same pain for points leader Krause this weekend.

Throw in two-time champion Daryl Hutton who is slowly finding the sweet-spot with his new package (sadly for the ex-pat Kiwi it has only taken 18-months), many regard the popular New Zealander as the best driver in the field, although he hasn’t enjoyed too much time on the podium since adopting the new Stinger hull at the start of last season.

With Ted and Darek Sygidus finding form with a podium result apiece last time out at Temora despite being down on power with their ‘Junior’ 500-cubic inch machine, and the addition of New Zealander Rob Coley to the field in his stunning 1600+ horsepower ‘Poison Ivy’, you have the recipe for an explosive weekend of action.

But as they say in the commercials.. that’s not all!!

Paul Gaston’s purchase of the most successful boat of the 2017 season was an inspired decision, and with the assistance of the man who very nearly dethroned Phonsy Mullan last season –  Tremayne Jukes – the former NZ regular has been slowly creeping up on the leaders and could be a real contender this weekend.

Glenn ‘Spider’ Roberts has been super-impressive this year, making the podium and setting top times in some qualifiers, marking the Victorian as one to keep a close eye on, whilst for Sprintcar driver Michael Cunningham, his calculating drives in Phil Dixon’s former championship winning Sprintec have been one of the highlights of recent rounds, making it another potential podium finisher in the mix.

With local star Daniel deVoigt and Cheryl Welch also returning to the field and fine conditions expected across the weekend, the Tweed Coast Jetsprint Club is looking at a big local crowd to watch the action unfold, but whilst the Unlimited Superboats are always crowd pleasers with their big horsepower numbers and flame-throwing methanol-fuelled engines, this year the 400-Class has been no less impressive and could be the real crowd pleasers this weekend..

CTVS 400-CLASS (International Group A)
After claiming the 2017 championship by just a single point, Weapon Racing’s Ben Hathaway took victory in the first round of the 2018 season at Griffith, but the popular Victorian has had his work cut out for him ever since, and didn’t even make the final at Temora last time out!

Queenslander Paul Kelly has become the greatest threat for the 2018 championship after victory in Keith, but there have been as many as seven drivers in with a tilt at the top of the podium, including Victorian Jody Ely who put in a dominant performance last time out to take his first win of the year at Temora.

This weekend the entry list for the 400-Class is a veritable who’s-who of the category over the last eight years, with no less than seven former champions in the field.

Traditionally the locals have been the star performers at Cabarita, but over the last 12-months it has been the Victorians who have been victorious, with both Jody Ely and Ben Hathaway taking the top step of the podium, Hathaway notably claiming his maiden title with the fastest time in the final rotation of the season in 2017 under immense pressure. To go back-to-back this year, he may well need to find that magical form once again this weekend, but there will be no shortage of challengers.

A few short years ago Jake Garlick was a rising star in V8 Superboats with a big future ahead, many people tipping the young Queenslander as a future world champion. He will be back in the family boat this weekend [Grumpy], and that should really set the cat amongst the pigeons in the 400-Class as he qualifies for the coming World Series.

Daniel James is another who could really upset the apple-cart this weekend, driving alongside Justin Roylance in the ‘Spitwater Team Outlaw’ machine which has taken on a few demon-tweaks since Temora. Roylance is intent on being a contender in the World Series, and with two-time champion James sharing the drive, there is every chance the #67 team will be on the podium – an ominous sign – the last time they drove together, they both made the podium!

With a 21-boat field, including a number of new and returning faces, the 400-Class field could deliver a collection of surprises, and some intense action as the teams do their best to prepare for the World Series.

The fourth round of the 2018 Penrite Australian V8 Superboat Championships will be contested at the Tweed Coast Jetsprint Club across two days, with opening qualifying at 12:30pm on Saturday, ahead of the second day of competition starting at 9:15am on Sunday, June 3.

For those of you unable to make the event, keep up to date with www.facebook.com/V8Superboats where results and updates will also be posted, but if you live in the area, do yourself a big favour, and drop down to Round Mountain Road, Cabarita Beach to take in some of the action live, you certainly won’t be disappointed! 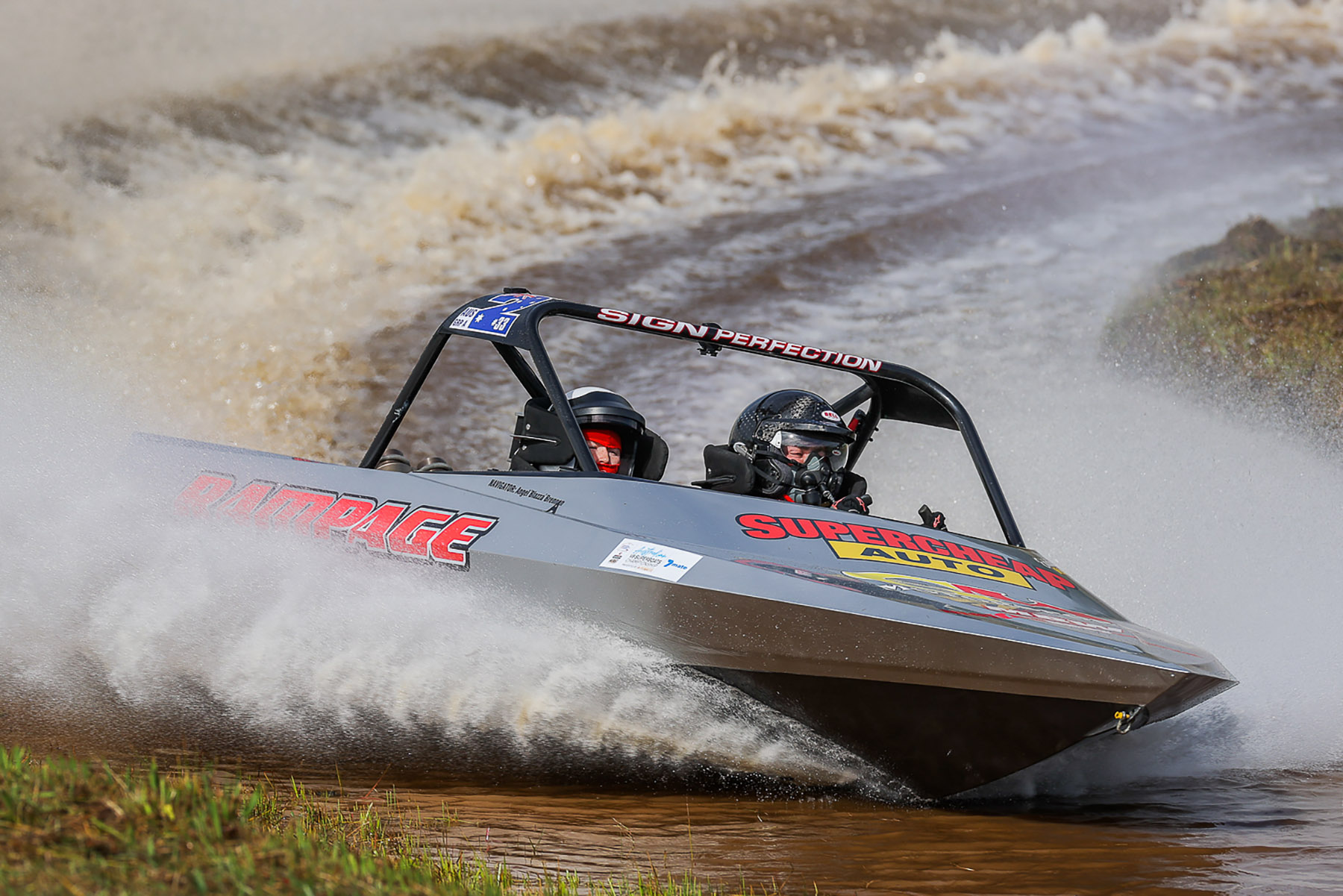 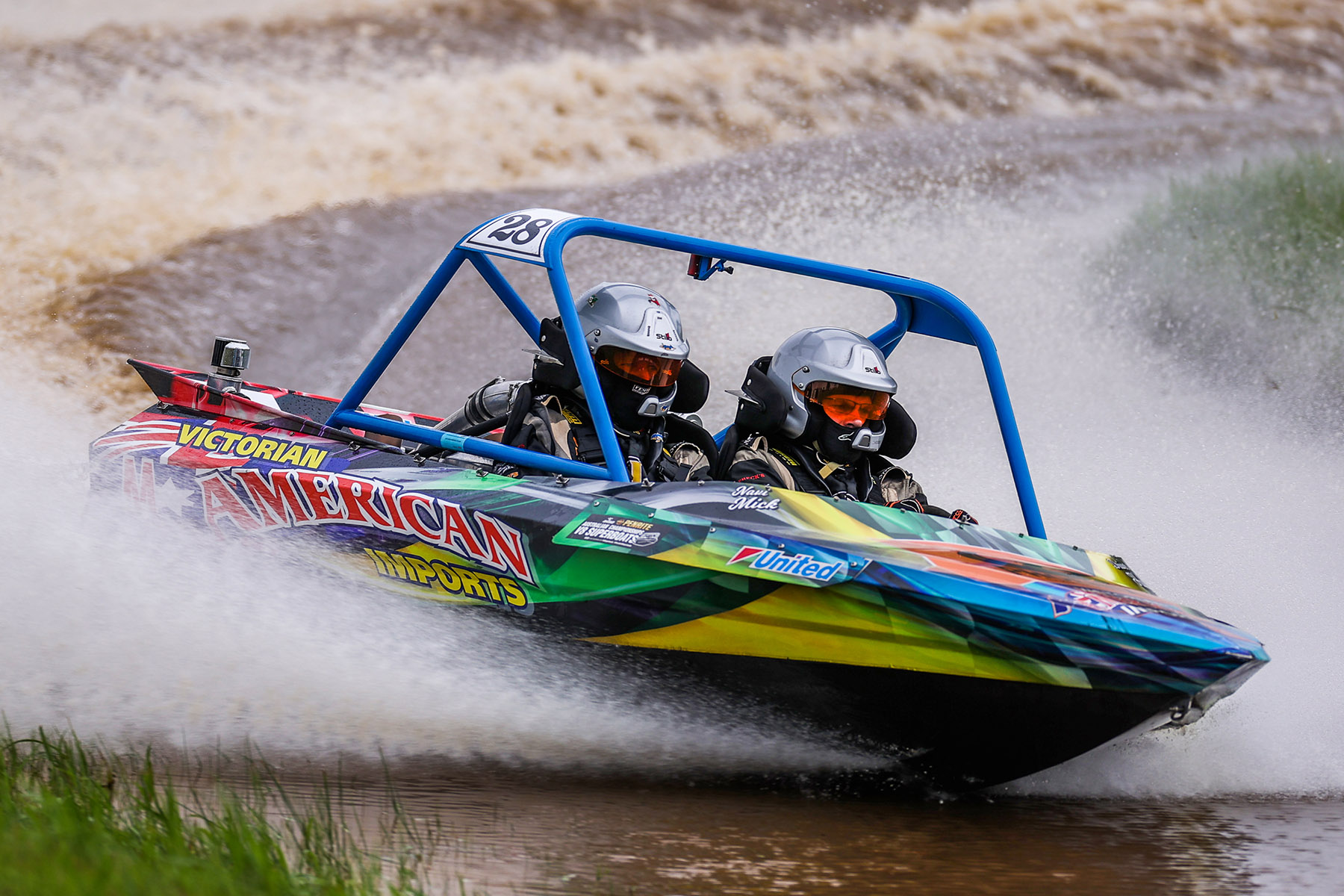