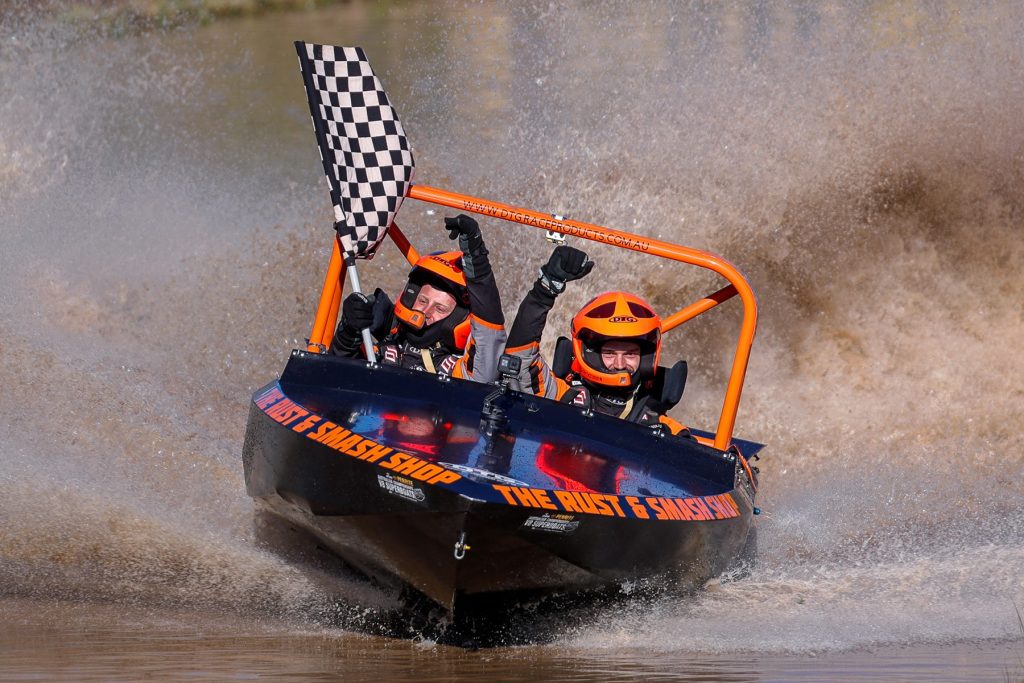 The 2019 Penrite Australian V8 Superboat Championship returns to arguably the toughest venue of the season this weekend, a circuit that has traditionally had a big impact on competitors, but unlike past years where the Riverina-based venue has played host to rounds much earlier in the season, this year it comes at a critical point in the championship, and could play an integral role in the title race..

We say it every year, but the title fight this season is one of the best on record across all three classes. Unlimited Superboat sees the resurgence of former World Champion [Group A] Slade Stanley who is taking the fight to the undisputed king of the category – reigning World Champion and six-time Australian Champion Phonsy Mullan.

In 400-Class the opening four rounds of the season has seen the finals dominated by Queensland’s Paul Kelly, the popular auto-electrician has won all four events to pave the way to his maiden national title despite immense pressure from a number of former (and current) national champions.

Like Mullan, Kelly has also seen success at Griffith and he likes a challenge, although last year’s aborted finals (intense rain fell ahead of the final rounds, forcing an early close to the event) saw him finish second behind great-mate and title rival Ben Hathaway.

The LS-Class too has seen a dominant start to the season, with Kyle Elphinstone continuing his unbeaten run heading into Griffith, but like his rivals, he knows only too well as a student of the sport – that coming into Griffith, you need to expect the unexpected..

Bottom line is.. If you live within reach of the Lake Wyangan venue, you would be doing yourself a great disservice by not being trackside under lights this Saturday night, because the Griffith venue ALWAYS DELIVERS when the Penrite V8 Superboats are in town..

The big news heading into the Griffith round is the ongoing battle between two of the best V8 Superboat drivers in the world – Griffith specialist and reigning World Champion Phonsy Mullan, and runaway points leader Slade Stanley.

After his world title victory at Cabarita last November, Mullan has again been on a development curve with his ‘RAMJET’ machine, and as a result he hasn’t experienced the reliability or consistency he’s accustomed too, whilst Stanley is on an ongoing winning streak that has seen him dominate the last three rounds, although with the tight points structure, consistency – and importantly, finishing – is the key!

At Griffith they will be rejoined by Mullan’s fellow AUS#1 Scott Krause. Sitting out much of the season after a technical setback at the World Series, Krause is back for Griffith and keen to impress upon both Stanley and Mullan that he’s lost none of his customary speed, speed which handed him equal top points with Mullan last season – Griffith the scene of one of his three season victories.

Daryl Hutton too will be back in action at a circuit where he is always a crowd pleaser.. Last year he kept the fans on their feet for much of the day as he bounced his supercharged unit around the circuit, the two-time Australian champion battling a package that had more in common with a rodeo bull than a top-flight Unlimited Superboat..

A lot has changed since February 2018 and Hutton is getting closer and closer to the sweet spot in his Farr Faster twin-turbo powered machine, and he could well prove to be the ‘wild card’ again for this weekend, for all the right reasons!

Throw in Glenn ‘Spider’ Roberts who always comes alive once the lights come on, the ever-improving Daniel deVoigt, the returning Michael Cunningham (finger’s crossed) and Starr Kopa  in the supercharged WIKID machine, and you have an ideal recipe for an evening of excitement.

Sadly we will be without the ‘Pride of South Australia’, Mick Carroll who is sidelined waiting for engine parts after a technical failure during the finals last time out at Cabarita, although you could expect to see ‘Excalibur’ back on the water next time out at Temora.

The big question coming into the Griffith round of the championship is whether or not anyone is capable of stopping Paul Kelly..

The runaway points leader has been flawless so far this year and capable of withstanding any challenge, although he might face a tougher time at Griffith with the return of Victoria’s Jody Ely who was a two-time winner last season, whilst Justin Roylance – who is now also in a Jetspeed hull identical to that of Ely – has also shown he is capable of pushing the bright orange #40 boat.

With the in-form Ben Hathaway also in the mix, and reigning champion Mark Garlick never out of the equation, things are bound to be interesting in the closely regulated 400-Class category.

Throw in former champion Brett Thornton, ‘Pink Boots Racing’ duo Greg Harriman and Hugh Gilchrist, Darrin Kesper, Ron O’Day and Brendan Doyle, and you have another great field of entries all eager to gain valuable championship points as we head into the second half of the season.

As for the battle for the podium, keep a close eye on Kelly to perhaps allow his rivals to set the early pace, whilst you couldn’t discount Roylance, Hathaway or Garlick.. It’s going to be tight!

The LS-Class has continued to prosper over recent rounds, and Griffith will be no different with nine boats entered in the field, although all will be forced to bring their ‘A-game’ on what is widely regarded as the toughest circuit in the country.

Like Paul Kelly, LS-Class points leader Kyle Elphinstone continues to dominate the championship, the second-generation driver turning in a string of flawless performances so far this year to carry a comfortable points lead into Griffith, although he knows that he is only one tough round away from a title challenge.

His rivals too are getting closer with each round, Dwayne Mezzadri one of those who has been able to take the fight to Elphinstone across recent rounds to put the points leader on notice.

With David Bray again in the field and also coming off back-to-back podiums at Cabarita, Kyle Reynolds, Lawrence Howlett, Robert Westerink, Andrew Medlicott, Graham Reynolds and the new entry of Rob Johnston, the weekend is complete and the field set for what is expected to be another fantastic night of racing under lights at Lake Wyangan..

The fifth round of the 2019 Penrite Australian V8 Superboat Championships will be contested at the Griffith Boat Club at Lake Wyangan, with gates open at 10:00am on Saturday, September 21, and racing concluding by 9:00pm. The circuit is located at the Griffith Boat Club, off Lakes Road (via Borga Road or Kidman Way), 10-kilometres north of the city.

Tickets are available at the gate or online via; http://griffithboatclub.com/event/2019-jet-boat-races/

For those of you unable to make the event, this weekend a live stream, and a range of interviews and videos will be made available via www.facebook.com/V8Superboats where results and updates will also be posted, but if you live in the area, do yourself a big favour, and drop down to Lake Wyangan to take in some of the action live, you certainly won’t be disappointed!

THE HISTORY; V8 Superboats and Griffith

TOP 6 FINAL (rain out for FINAL)

Unlimited Superboat (after round four of seven)

LS-Class (after round four of seven)

Founded in Melbourne in 1926 by – then – 16-year old Les Mecoles, Penrite Oil utilised high-quality lubricants from Pennsylvania [USA] base stocks, hence the name ‘Pen’ from the base stock and ‘rite’ for the right oil.

A selection of images are available in hi-res through the following link;