Jukes is the giant-killer, defeating Mullan in Superboat final

Home / Jukes is the giant-killer, defeating Mullan in Superboat final 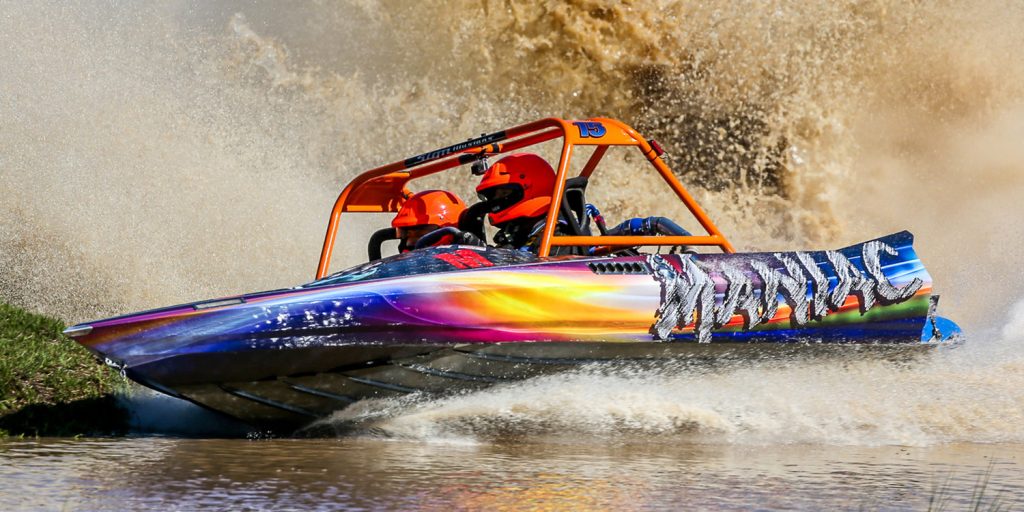 Coming into the opening round of the 2017 Australian V8 Superboats Championship there was a sense of deja-vu for the amassed fans on the hill, with the mighty #1 RAMJET Racing machine of four-time [back-to-back] champion Phonsy Mullan dominating the qualifying heats as he has done on some many occasions across recent seasons. Heading into the finals things looked very much like they’d continue down that all too familiar path, but just one person decided he’d ‘flip the script’ for the final run of the night, Tremayne Jukes bringing the big crowd to their feet in vocal applause as he finally did what so many had failed to do before him – top the timesheets by 0.221 seconds to claim victory against the might of Mullan in an Australian final..

For Jukes – who took over the mighty ‘Loose Cannon’ of former Australian champion Dean Finch in 2016, it was just a matter of time before he would take the new look ‘Maniac’ to victory, although he admitted that it was some kind of minor miracle that he made the finals at all, after physically injuring himself during the week.

“I told the crew that just to make the ramp on Saturday felt like a win,” Jukes explained. “It turns out I’d damaged two vertebrae in my neck after bumping my head into some steel during the week, so I wasn’t in a good way, in fact if you look at the onboard from my lap in the final, my head is floating around like a rag doll, it wasn’t comfortable, but I have to say I didn’t feel too much pain after that last lap, it was a cracker.

“The boat is incredible, no question. Finchy [Dean Finch] is a wizard, it’s a beautiful thing, and Darren Farr [engine builder Farr Faster] has built an amazing engine, the thing is so much faster than I can drive it, but it did come with a warning when I bought it. Finchy’s advice was to make it my ‘own boat’ and not to try and drive his boat. I didn’t know what he meant at first, but I understand now.. The other thing he told me is to play nice, if you get aggressive, it’ll hurt you, and I didn’t take it on to hurt myself!

“As for the result, it was great to have the win, but I’ve got a massive task to keep Phonsy behind me, he won’t be down for long, and I get the feeling that both Keith and Griffith will better suit a naturally-aspirated boat, but I’ve had the taste of victory now, and I like it, so second won’t be good enough any more..!”

For Mullan – who set the fastest lap of the weekend in the Top 6 – a dropped piston on the run home in the final stalled his progress, but he admitted that after being on top of the sport for so long, it was only a matter of time before someone unseated him off the top step of the podium.

“I’m frustrated that we couldn’t take it through for the win, but we tried. We had a valve malfunction and lost the #2 cylinder so I just kept the foot in and fell short of my best by three tenths. Look I’m happy that it was TJ that took the win, he deserved it and has been trying hard for a long time, but he better not get too comfortable.

“I’m proud of what the RAMJET team has been able to achieve over the last three seasons, no-one has been that dominant so consistently in the sport over such a long period of time, not even multiple world champion Peter Caughey.

“We’ve got a little more work to do with the naturally-aspirated machine, but we will have an all-new twin-turbo machine on the water later in the season to prepare for the forthcoming World Championships which is our ultimate focus. That said, we’re going after our fifth consecutive Australian title, so we still have our eye on the prize, but we’re also keeping an eye on the bigger picture. It’s not over yet!”

Whilst Jukes and Mullan kept everyone honest in the Unlimited Class, the 400 Class provided plenty of intrigue with recent graduate Ben Hathaway, reigning champion Brett Thornton and former champion Mark Garlick going head-to-head all the way through to the finals. Hathaway looked to be the driver to beat, but an off in the final allowed Thornton to keep his winning streak alive, with 2016 runner-up Jody Ely sneaking through to the podium.

Ivan Safranek became the first winner in the new 350/LS Class, defeating father-and-son team Graham and Kyle Reynolds, with the ‘old boy’ coming up trumps in the final to claim second.

QUALIFYING
With four rounds of qualifying across the day-night event there was plenty of time for teams to dial themselves in for the opening round of the season, although almost immediately there were dramas for the ‘Frankenzstain’ crew of Ted and Darek Sygidus, a fuel pump issue stalled their progress, and ultimately kept them busy in the pits until the final qualifier of the night – a tough start to their 2017 season.

Reigning Unlimited world#3 Aaron Hansen was another driver who failed to record a time in the opening session, whilst his team-mate – Glenn ‘Spider’ Roberts showed the big-block ‘Blown Budget’ was going to be right in the mix, by setting the fifth fastest time, ultimately carrying his pace all the way through to the final six.

Another driver suffering niggling issues was former national champion Daryl Hutton, the New Zealander debuting an all new Stinger hull for the new season with hopes he could push the leaders even further with his incumbent 1200bhp supercharged-400ci powerplant, but sadly the new package required more sorting to be competitive, the popular Unlimited driver lamenting a boat that was steering around the nose, and not around the tail..

Typically ‘Excalibur’ duo Tony Giustozzi and Mick Carroll were right in the mix, the South Australians pushing the leaders all the way to the finals, whilst Jeremy Kincaid again impressed with his supercharged Ford 302 to make it into the final slot for the Top 6, taking advantage of Hutton’s ongoing woes, and the demise of the two ‘Frankenzstain’ drivers.

Paul Burgess and Daniel deVoigt continued their forward progress to trump Hanson and the Sygidus brothers in the Top 12, whilst local star Scott Krause was forced to lament what might have been after an engine failure during the first run of the day in the mighty supercharged ‘Soak’n Fused’.

In 400-Class, the return of 2015 champion Mark Garlick promised plenty of action at the top of the timesheets, but in the end, the qualifiers were dominated by Ben Hathaway in the ex-True Blue Racing Sprintec that took Brooke Avenell to a string of class victories.

Reigning champion Brett Thornton was quick early, but Hathaway stunned the field with a collection of 43-second laps, at times almost two seconds faster than anyone else in the field and quick enough to be top five in the Unlimited class!

Sadly, the expected debut of Justin Roylance in the all-new Spitwater Team Outlaw operation stalled before it hit the water, an engine failure on it’s final dyno run just 24-hours before saw the expected title challenger sitting on the bank for the day, whilst Greg Harriman’s absence allowed co-boat owner Hugh Gilchrist to earn some valuable laps – so too the returning Clint Ruby in ‘Dirty Deeds’.

Temora also saw the debut even for the revived 350 Class which is now also open to LS-powered V8 boats, providing a lower cost introductory class to the sport.

Debutante Ivan Safranek was the standout, comfortably topping the timesheets through qualifying to head into the final as the #1 qualifier, ahead of father and son combination Graham and Kyle Reynolds, the two sharing driving (and navigating) duties in RedRum.

FINALS
After the first final it was clear we had a race on our hands, Jukes topping the session with a best of 40.517, almost three tenths faster than Mullan. Mullan then dialed in the time of the night in the Top 6, to raise the bar to a 40.036, some three tenths faster than Jukes best run of the day, in the process dropping the impressive Glenn Roberts, Mick Carroll and Jeremy Kincaid out of the final three.

The ‘new look’ Tony Giustozzi then found an impressive three tenths, the South Australian using his naturally-aspirated 500ci package to again snap at the heels of the leaders, but whilst enough to get within three tenths of Jukes’ impressive Top 6 time, he was still short more than a second on ‘Maniac’s’ best, Jukes stopping the clock with a 40.151.

As always, Mullan was out last, the Victorian pushing hard and whilst up on his best early, the dropped cylinder on the final run home saw him fall short by just over two tenths of a second to hand Jukes the biggest win of his career.

In 400 Class, a monster off by Clint Ruby in the Top 12 brought his run to a premature end, fortunately without too much physical damage to the boat, nor its occupants, but it certainly had the big Temora crowd on their feet with bated breath.

Paul Kelly was the next to go, the Temora rookie out in the Top 6, bringing to an end a solid debut at Lake Centenary. That allowed Brad Marsden to sneak into the top five, but he too was eliminated before the final as was multiple Australian champion Mark Garlick, the Queenslander unable to find the form that comfortably won him the 2015 title, his 46.339 in the Top 6, seven tenths of a second short of a finals berth.

That misfortune allowed reigning AUS#2 Jody Ely through to the final, the Victorian taking second behind reigning champion Thornton after an off by runaway 400-Class rookie Ben Hathaway in ‘Weapon’, the Victorian unable to keep it together for victory, but not before showing he will be a serious title contender as the season progresses.

In the end, Brett Thornton’s consistency also netted he and wife Lyn the 2017 Colin Parish Memorial Trophy, presented to the Queensland-based team by Colin’s daughter Teresa, a former international star herself in V8 Superboats.

Meanwhile in the 350/LS Class, a slight slip up in the final very nearly opened the door for Graham Reynolds to sneak through for the win over Ivan Safranek, the margin of victory in the end just 1.5-seconds, with Kyle Reynolds third.

With the opening round of the 2017 season now in the books, focus turns to South Australia, where V8 Superboats will debut at the all-new Keith venue on 25 March as part of the impressive new motorsport venue that will play host to the Keith Diesel and Dirt Derby.

After an outstanding return to racing earlier

After an outstanding return to racing earlier