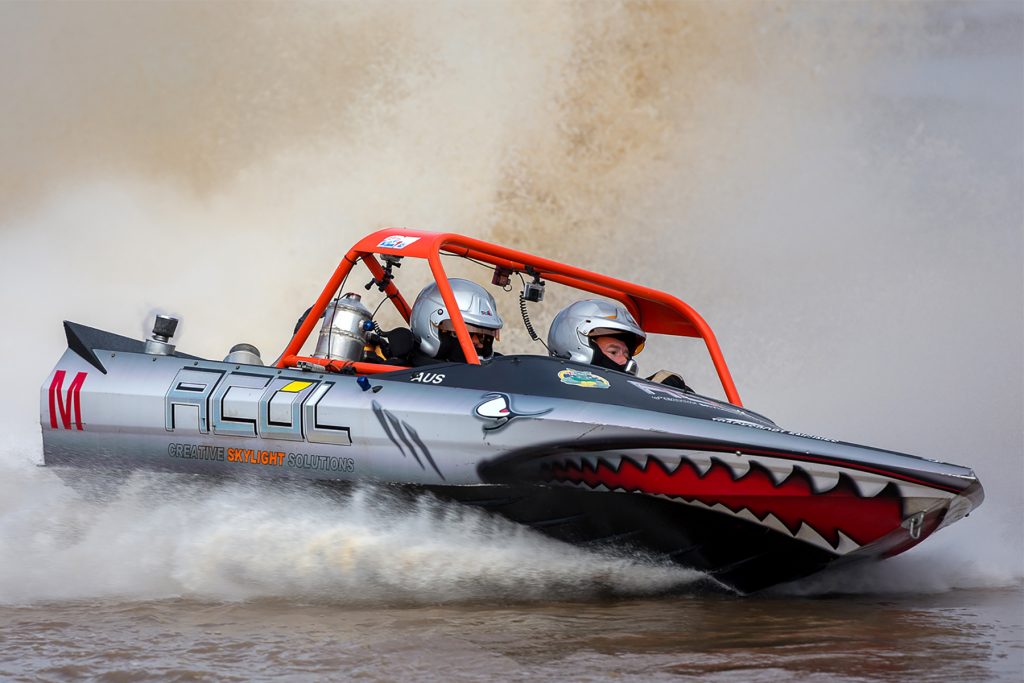 Two of the most popular icons in Australian V8 Superboats will make a welcomed return to the water for the forthcoming Penrite UIM World Series, with Tremayne Jukes [TJ] announcing his return to the sport after an enforced sabbatical, behind the wheel of one of the most feared boats in the world, Greg Mercier’s 2012 championship winning shark..!

A winner of four rounds in season 2017, Jukes narrowly lost the Australian Unlimited Superboat title to fellow Victorian Phonsy Mullan despite winning four events to Mullan’s two – such was the – then – four time champions consistency. Sadly for Jukes, he was forced to sell his much loved ‘Maniac’ post season to concentrate on business, the former ‘Loose Cannon’ of Dean Finch moving to Paul Gaston’s hands where it has continued to menace the top boats in the class.

Over recent months Jukes had worked on a program to have himself entered in the end of season Penrite UIM World Series, but despite his best efforts he was unable to put a deal together, ultimately resigning himself to standing on the bank to watch the world’s best fight it out without him.

Enter Greg ‘Crusty’ Mercier and wife Dorinda [Mrs Crusty], two of the most loved members of the greater Superboat family – the 2012 Unlimited Superboat champions offering Jukes an opportunity to use their iconic ‘shark’ hull if he could find an engine, in the process throwing Jukes a lifeline and an opportunity to take the fight to his rivals. The next step, an engine…

Enter Jeremy Kincaid and his Dick Johnson Racing-built supercharged 302-Ford Windsor, Jukes former team-mate sitting out the worlds whilst he dials in his existing hull, providing the 2017 runner-up all the tools he needs to go after the title.

“To be honest, I was pretty down a couple of weeks ago because I’d all but given up on being in the field,” Jukes admitted. “At one stage we were going to run with Jerry [Kincaid] but his hull needs a lot of work so he pulled his entry out for the Worlds. I had a couple of other options too, but they required more budget than I could put together, so I thought it was over.”

“Then ‘Uncle Crusty’ – perhaps with some prompting from Dorinda – rang me and offered me the ‘shark’ as long as I could find an engine as Crusty had sold on his 570-SBC powerplant more than a year ago to Peter Caughey.”

“That gave me all the parts of the puzzle I needed and with a ‘wildcard’ entry it suddenly all became very real.”

Aside from it’s iconic trademark ‘smile’ the Mercier Sprintec was one of the most competitive packages in the world over the last five years, with a second in the 2014 World Series as well as a very real podium chance at the last World titles ahead of an out of water incident that ultimately saw Crusty injured.

The last two years have seen the boat parked up whilst Crusty pondered his racing future, the veteran toying with the idea of a return to the sport using the 500-SBC he used to win the 2012 Australian series, and had it all but ready for water testing before an offer saw the engine heading to the USA.

At the same time, Jeremy Kincaid had been working to establish the sole Ford-powered engine in the Unlimited field as a winner, but a tough run with his hull and a series of retirements saw the project shelved, but despite it’s lack of success, Jukes believes the engine has the goods..

“It’s running at 1000-horsepower, which in a boat that handles as well as Crusty’s Sprintec, will be more than enough to take the fight to the more powerful boats,” he admitted.

“Look, last year we probably had 1600-horsepower on tap with our twin-turbo Farr Faster built Chev, but we couldn’t use all that power, we were always having to dial it back, it was just too powerful. The ‘little’ supercharged Windsor has plenty of torque, but it’s not a big supercharged unit like Daryl Hutton’s, it has nowhere near the mass, so power-to-weight it’s as good as most of it’s rivals, although what Phonsy and Caughey arrive with is still an unknown, but that doesn’t concern me.

“I’m not going to make any profound statements about what we will or will not be able to achieve in Keith and Cabarita, but I know what we will arrive with will be equal to the task, now it’s down to me and the boat, I can’t control what anyone else does, but I can guarantee you, I’m not going there to make up the numbers.. There’s a bit of unfinished business I need to take care of!”

Whilst Jukes is reflective about just how competitive he will be, he does still have one niggling issue pressing that is still playing on his mind.. dollars!

“We have all the parts of the puzzle, and we’ll be very visible in out title assault, but I won’t deny that we need some more budget to get the whole project across the line, especially in case of any technical hiccups or accidents, I can get us there and cover our basic costs, but we don’t need any setbacks because I’m not sure we’ll be able to cover them.”

Anyone interested in assisting the new ‘Maniac’ ahead of the World Series can contact TJ via jukesindustries@outlook.com

Founded in Melbourne in 1926 by – then – 16-year old Les Mecoles, Penrite Oil utilised high-quality lubricants from Pennsylvania [USA] base stocks, hence the name ‘Pen’ from the base stock and ‘rite’ for the right oil.

A selection of 2018 images are available in hi-res through the following link;