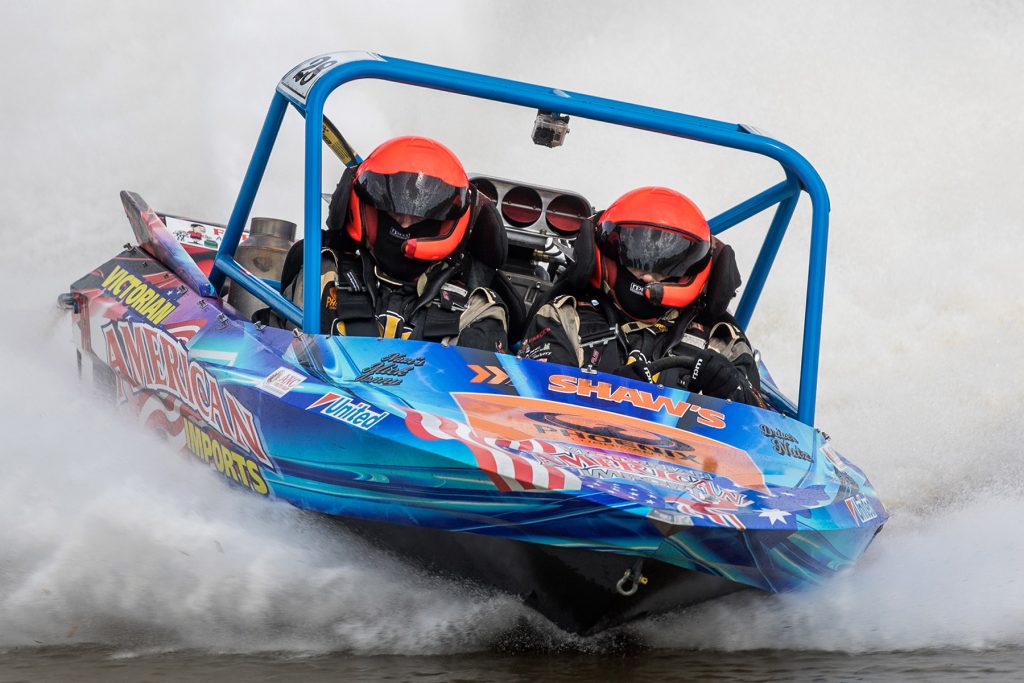 After an epic season that concluded with the Penrite UIM World Series late last year, the 2019 season gets underway at the very venue that hosted the opening round of the ‘Worlds’ to commence a seven round title race that includes no shortage of challengers across both the Unlimited, and International Group A categories.

For the first time in the history of the sport, the 2018 Unlimited Superboat crown was shared by two drivers – runaway early season race winner Scott Krause, and – at that stage – six-time Australian Champion Phonsy Mullan.

They are both back this year, but will be kept honest by former World and Australian champion Slade Stanley, New Zealand’s Rob Coley, and the resurgent Daryl Hutton, the two-time champion looking for scalps after a tough few seasons..

In the International Group A category (400-Class), there are a number of drivers looking to make amends for the 2018 season, not the least being Paul Kelly who was in title contention for much of the year, and former champions Ben Hathaway and Brett Thornton.

Reigning champion Mark Garlick comes into the new year with a new hull, and so too Justin Roylance who finished on the World Series podium at Keith last year, whilst Jody Ely has done plenty of homework in the off-season and will be right on the money come Sunday afternoon at Keith.

The season-opener will be the fourth time the Australian teams have seen the Keith venue – regarded as Australia’s best Superboat facility – with two previous visits to the annual Diesel & Dirt Derby and a World Series slot in October last year, but all are well aware that whilst the glorious grass-lined channels look fantastic, the underlying feature is that if you use too much bank, it can be game over very quickly..

UNLIMITED SUPERBOATS
The return of former Group A World Champion Slade Stanley is a huge bonus to the Unlimited Superboat field this year, the former Group A star is one of few drivers who have been able to take the outright fight to Phonsy Mullan in past years, and with the world#1 title to Mullan’s name, the seven-time Australian champion has a huge target on his back in 2019.

Mullan will come into the season having worked across the off-season on a new engine package, his full-time aftermarket engine performance operation giving him multiple engine options for the season ahead, although you could expect to see more of the naturally-aspirated LS engines this season, Mullan having developed some of the most spectacular powerplants in the world.

For a number of teams, the off-season has left many of them racing to reassemble engines, and in some cases they’re still working into the small hours in the leadup to Keith, in an effort to be ready for the season opener.

It is that scenario that may well see Mullan start with his World Series winning package, whilst for Daryl Hutton, his Cabarita engine failure during the Worlds will see the ex-pat New Zealander return to his mighty supercharged 468ci powerplant for the opening round whilst bespoke parts for his Farr Faster twin-turbo unit are replaced ahead of Temora.

The two-time Unlimited champion though acknowledges that whilst he will have plenty of power at his disposal, he’ll be wearing an extra 70-kilograms of ballast, most of which sits up high above the manifold, severely challenging the boat’s ability to change direction quickly, something which will no doubt present plenty of entertainment for the fans..

Scott Krause has had some work to do in the off-season after the fire that plagued him during the Cabarita round of the Penrite World Series, the mighty twin-turbo V8 that powered the Temora local to the 2018 Australian Unlimited Superboat title getting a ‘birthday’ ahead of the new season.

For Slade Stanley fans, the return on the two-time Group A World Champion delivers the promise of an outstanding season. Using the same JRE480ci naturally-aspirated V8 package that saw him punch out some very competitive laps during the UIM World Series, Stanley will be right in the mix at the pointy end of the field, but he won’t be alone.

Glenn ‘Spider’ Roberts returns with victory on his mind, the Shepparton-based driver right on the tail of the top three for much of the 2018 season, his runner-up position to Phonsy Mullan at Cabarita mid-season, one of the highlights of the year.

‘Excalibur’ too will be back with just a single driver this season, Adelaide’s Mick Carroll taking over full ownership of the boat that he and Tony Giustozzi have shared in recent years, the naturally aspirated 510ci V8 given a birthday by Maxwill Engines and the boat a new front end after double contact with the bank at Cabarita during the World Series.

Rob Coley returns to Keith after a lacklustre World Series, the New Zealander has a number of the most potent engine and hull packages in the world including Peter Caughey’s race winning Sprintec campaigned in the World Series last year, Caughey having been comfortably the standout at the Keith round to take top honours.

For Keith, Coley will use one of his potent Sprintec combinations, likely powered by a twin-turbo Nissan engine with insane horsepower.

Michael Cunningham is another with a title winning Sprintec at his disposal, the Sprintcar regular having worked on his racecraft in the off-season as well as the performance of ‘True Blue’, keep a close eye on the Victorian, he could be the joker in the pack this weekend.

Daniel de Voigt returns to Keith looking for a strong start to the season, the reigning World#8 carrying new support into the 2019 championship, and the motivation to take the Devo Racing machine onto the Unlimited class podium.

400-CLASS (International Group A)
With four months between races, the 400-Class field has been busy, with a number of changes ahead of the new season, most notable of which is a new boat for reigning champion Mark Garlick.

‘Grumpy’ has been finally retired, the Garlick family campaigning a new look in 2019 with the ‘Grumpy On Edge’ livery and a flash blue scheme, the ‘new’ Stingray hull though expected to give the four-time champion a fresh edge over his rivals.

He’s not alone though, 2002 350-Class champion Andrew Medlicott comes into Keith with a boat that has podium credentials in both Australian and World Series conditions, having taken on Justin Roylance’s 2018 mount.

Roylance has a new boat due any day, but for Keith he has taken over the reigns of the sister hull to his 2018 machine, the JRE Engines boat that Daniel James took to the World#3 title at Cabarita last November – a combination that could be good enough to win.

Paul Kelly is still lamenting falling just short of the 2018 Australian title, and as a former winner at Keith, you can be sure he will be pushing to open his 2019 account with a win, but he’ll have no shortage of challengers.

Former champions Brett Thornton and Ben Hathaway will also be tough to beat, Hathaway carrying increased support from Warren & Brown Tools, and with his multiple championship winning Sprintec hull back beneath him and his Kanaris Engines powerplant sitting behind his shoulder, the former Keith winner too will be looking to make amends for a tough World Series campaign.

So too Jody Ely, the Victorian was a two-time winner last year, but a tough World Series saw a setback that burned across the off-season, making him even more determined to make his mark on the championship this year.

West Australian front-runner Daniel Salter will make the journey east to be part of the opening round, whilst Pink Boots Racing duo Greg Harriman and Hugh Gilchrist are back in the saddle for the coming season, but they’ll have some competition..

Brendan Doyle makes his debut in the ex-Sam Everingham Stingray, whilst Ron O’Day returns in Agrovation looking to improve on his experience from the closing rounds of the 2018 season.

For Kyle Elphinstone, the start of the 2019 season couldn’t come fast enough, the LS-Class front runner though lamenting a lack of competition, with the Superboats development category suffering as a result of unfinished boats, although the news for the coming rounds couldn’t be brighter with rumours of as many as five teams for the Temora round in early May.

The opening round of the 2019 Penrite Australian V8 Superboat Championships will run again within the annual Keith Diesel & Dirt Derby at Spitwater Arena, so the timeframe will also include other events on the day, with an early start on Saturday morning ahead of a mid-session break for other activities.

The Keith Showgrounds are located on the north-eastern side of Dukes Highway off Emu Flat Road. Qualifying heats will begin on Saturday from 8:30am, with the finals underway at 3:00pm.

In 1979, due to ill health, Les sold the company to John and Margaret Dymond. A mechanical engineer by trade and a car enthusiast at heart, John rapidly expanded the Penrite range of products.

His technical background and commitment to quality ensured that Penrite continued to produce the highest quality products becoming the market leader in Australian oil and lubricants. 90 years on from those early beginnings the Dymond family have built Penrite into one of Australia’s most prominent and recognised brands.

The iconic Australian-made and owned lubricants company has a simple philosophy: ‘the right product for the right application’. Penrite Oil Company produces a large range of high quality products suited to the Australian conditions including the exciting 10 Tenths Racing Oils range which offers a superior package of performance and protection for both competition and high performance engines.