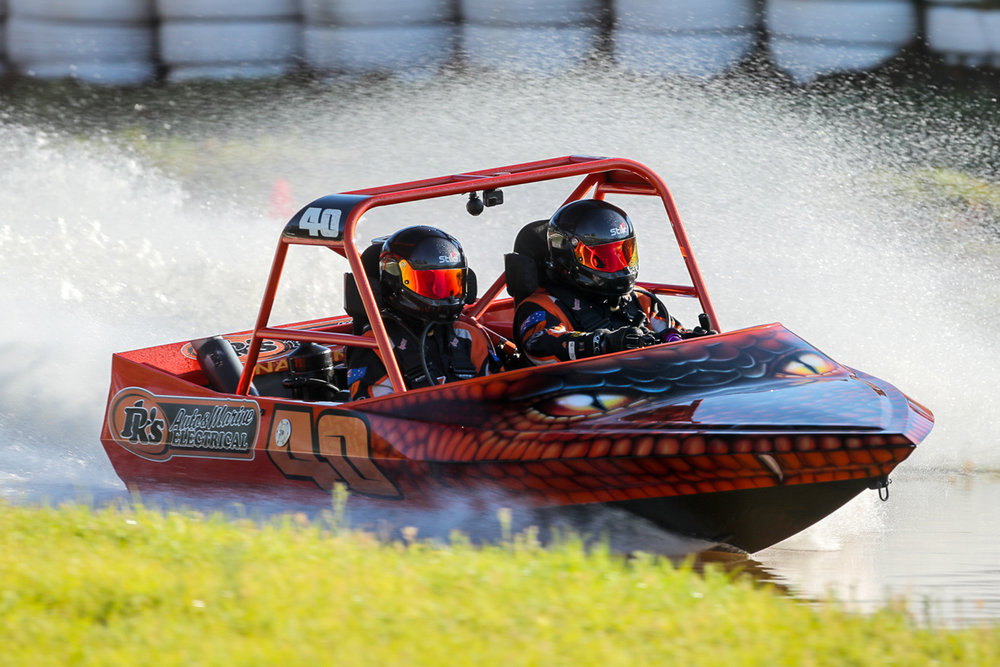 Griffith was at its notorious best on Easter Saturday, presenting the V8 Superboat regulars with arguably the biggest challenge of the season on the tight, twisty, unforgiving Lake Wyangan layout under lights, an event that always turns up a surprise, and this year was no different.

Ultimately Australia’s most successful driver claimed the top spot in the Unlimited class after an epic head-to-head battle with points leader Tremayne Jukes, Phonsy Mullan regaining the top step of the podium for the first time this season, but typically Jukes didn’t make it easy.

In the 400-Class points leader Ben Hathaway was a standout early, but a technical issue before the close of the qualifiers forced him to join 2016 Griffith winner Brad Marsden to keep his championship points alive. That allowed Griffith rookie Paul Kelly to take an emphatic victory over the ‘Spitwater Team Outlaw’ pairing of Daniel James and Justin Roylance, whilst in the LS-Class, Ivan Safranek extended his championship points lead.

Always a popular stop on the annual V8 Superboats calendar, Griffith presented a fantastic clear warm day that broke into a beautiful night under the stars, with plenty of fireworks on track and a number of out-of-water excursions that kept the big Griffith crowd on their feet.

QUALIFYING
As he has done all season, Phonsy Mullan was fast straight out the gate from opening qualifying, setting the pace for the remainder of the Unlimited Superboat field to chase, the ‘RAMJET Racing’ driver pushing his naturally-aspirated LS527ci-powered machine to a best of 37.297 in Q3 and to show just how much he had in reserve, three of his qualifying laps were within 17 one hundredths of a second.. he was pushing hard.

Typically, Jukes eased himself up to speed in ‘Maniac’, but he was taking a very measured approach through qualifying, his 38.195 best more a display of control than sheer outright pace, the Victorian ensuring he was in the finals where he would ultimately wind up the mighty 1300-horsepower twin-turbo machine and take the fight to his title rival.

Keith podium finisher and former 400-Class champion Ted Sygidus claimed the third fastest time by the close of qualifying, the team employing their ‘smaller’ 500ci machine hauling ‘Frankenzstain’ to a best of 39.997, younger brother Darek fifth fastest and just off a second slower than Ted, the pair caught in a tight battle with ‘Excalibur’ pilot Mick Carroll.

Superboat veteran Paul Burgess continued to show impressive speed to be sixth fastest in the supercharged ‘Daly Transport’ machine in his battle with Glenn ‘Spider’ Roberts, whilst for two-time Unlimited champion and former Griffith winner Daryl Hutton, the misery continued with his new package, this time a mechanical issue forcing him out in Q3 before Glenn Roberts offered him a seat in ‘Blown Budget’.

Unfortunately business commitments forced the late withdrawal of a number of 400-Class title contenders, but that didn’t affect the show with a Griffith rookie going head-to-head with a former champion and his team-mate as the championship points leader finally faltered..

Unsurprisingly, Ben Hathaway was the early pace-setter, the Victorian in his new boat ‘Weapon’ was not only at the top of the timesheets, he was in a different postcode! Almost four seconds faster than former 350-Class champion Daniel James in Q1, he went a second and a half faster in Q2, but by Q3 something was amiss mechanically and it was game over for the former championship winning machine.

Hathaway was offered a lifeline by rival Brad Marsden which allowed him to earn valuable championship points, but his pace dropped off significantly allowing a new star to shine..

Paul Kelly had typically focused his racing around the Tweed Coast venue over the last 18-months, with season 2017 his first foray south, and from the opening round of the season he’s proven to be both fast and consistent. Third fastest in the opening two qualifiers, he was second in Q3 setting the overall top time for qualifying at a 42.499 (after Hathaway’s times were scrubbed with the retirement of ‘Weapon’) six tenths faster than former team-mates Justin Roylance and Jody Ely.

Roylance was revelling in the support of former champion Daniel James, the two drivers working together seamlessly to improve the pace of the ‘Spitwater Team Outlaw’ machine, with James ending qualifying fourth ahead of Hathaway and 2016 Griffith winner Marsden.

LS-Class points leader Ivan Safranek settled into his Griffith debut in fine form, comfortably on top of rivals Kyle and Graham Reynolds in ‘RedRum’, the duo sadly eliminated in the second qualifier in a big crash mid lap that could ultimately see the final run for the hull – Griffith strikes again..

FINALS
As he had done at Keith three weeks ago, Tremayne Jukes left his assault on the top of the timesheets until the finals, setting a best of 37.819 in the Top 12 run to be nine tenths faster than Mullan who was uncharacteristically off his qualifying pace. Ted Sygidus was still in the hunt taking the third fastest time, just four tenths clear of brother Darek, whilst Carroll too stayed in contention with the fifth fastest lap.

Sadly Paul Burgess’ run came to an end with a navigational error that he failed to rectify, eliminating him from the Top 6, whilst Roberts suffered an off to end his weekend, in the process keeping Hutton from his final run, the two of them forced to watch their rivals from the bank.

You don’t keep a champion down for long, and Mullan soon returned fire in the Top 6 final, setting a blistering 36.824, the fastest run of the night – a time Jukes was unable to beat, his run three quarters of a second slower. Ted Sygidus too was under fire, Mick Carroll putting down an impressive 39.390, his fastest of the night, forcing Sygidus to dig deep, but the Victorian was up for the challenge, making it into the final run with a 39.076.

For the last run of the night Sygidus backed up with a 39.160, before Jukes punched out a 37.572 – just shy of his Top 6 best but enough to apply pressure to Mullan to emulate his top time, the ‘RAMJET’ driver duly responding with an impressive 37.008 for his first win of the season.

In the 400-Class Paul Kelly continued to show impressive pace to top the first final, his 43.416 a full second and a half up on the ‘Spitwater Team Outlaw’ pairing with Roylance showing pace to defeat his highly credentialed team-mate by a mere three one hundredths of a second, whilst Brad Marsden claimed fourth ahead of Hathaway and Jody Ely, who was well off his best.

Roylance was the star in the Top 6, setting an impressive 42.707, the first boat into the 42s (outside of Hathaway’s runs in ‘Weapon’), but Kelly went quicker again, lowering the mark to 42.629 to be P1, James the final entrant to the final three, defeating reigning AUS#2 Jody Ely by a mere 13 one hundredths of a second, whilst Hathaway managed to mitigate some of the damage of his DNF to claim fifth for the round.

By final time everyone was pushing hard, Roylance out first with a 43.000 to push his rivals to dig deep. James topped his team-leader by 13 one hundredths to go to the top, but Kelly stunned his rivals, finding a full second on his last run of the night to finish with a blistering 41.685 for his maiden V8 Superboats victory on debut at arguably the toughest circuit in the country..

Sadly for the LS-Class the retirement of ‘RedRum’ during the qualifiers meant that the fans were robbed of what could have been a great battle for the top points, but in end, Ivan Safranek and ‘Katana’ claimed their second win of the season to extend their championship points lead.

The Australian championship contending teams will now move north for the fourth round of the season at the popular Tweed Coast venue for a two day event at the end of May (27-28).