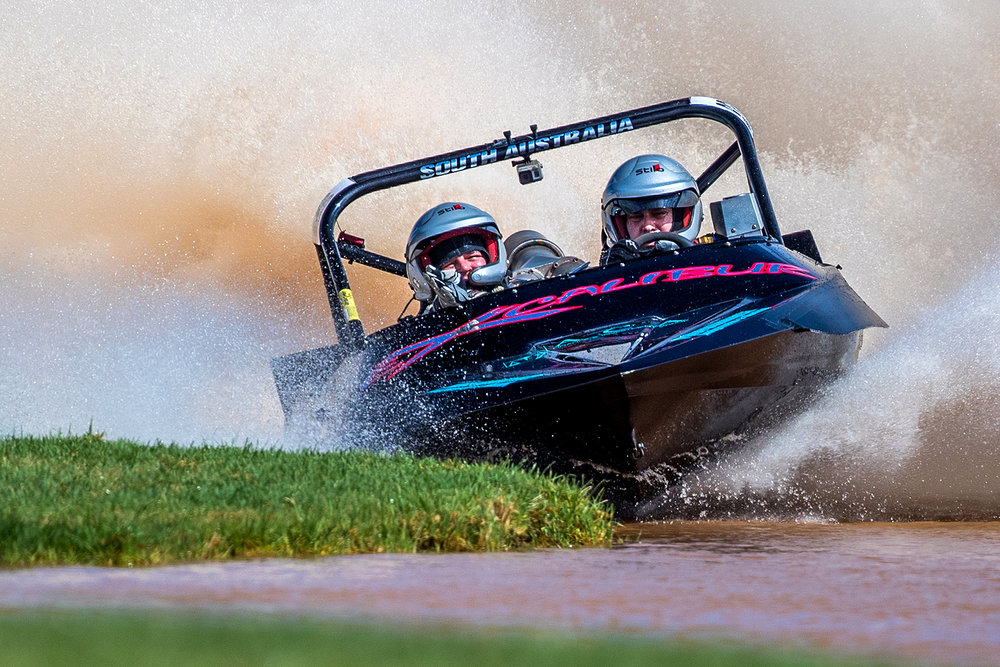 The Australian V8 Superboats Championship will make a long awaited return to South Australia this weekend, with the Series’ maiden event at the new Keith facility as part of the popular Keith Diesel & Dirt Derby, an annual event at Keith Showgrounds that has been steadily attracting bigger and bigger crowds with each passing year.

The brainchild of local farmer Glen Simpson, the Keith event was established to help the local community and the struggling agricultural show with the addition of activities like a tractor pull and the popular header (harvester) demolition derby. From a start of 500 people, the event went on to attract 7000 people last year, and the inclusion of some of the world’s fastest jetboats is likely to see this year’s event top that mark.

For the jetboat community Keith provides a vital addition to the calendar, at a venue within reasonable distance of a major capital city (Keith is just two hours from Adelaide), but the relationship between the Australian Formula Jet Sprint Association [AFJSA] and the Diesel & Dirt Derby is expected to be mutually beneficial..

“Since it was first discussed, we knew we had to do whatever we could to assist Glen and his team to make the Keith venue a success,” AFJSA President Grant Bourke admitted.

“We’ve already had a test on the new circuit, and it was judged an immediate success, so we’re looking to put on a great show for the local fans, and continue to build our growing fan-base.

“It’s important for us to have another fantastic purpose-built circuit to compete on, whilst we hope that bringing Superboats to town will help the Diesel & Dirt Derby event to become even more popular.”

Based on the opening round of the 2017 season at Temora three weeks ago, the Keith crowd is going to see some fantastic action..

“I’ve seen the Keith venue and looked at some of the onboard footage from the test day, it looks impressive,” four-time Unlimited Superboat champion Phonsy Mullan admitted.

“To me it has a feel very much like Cabarita on the Tweed Coast, a fairly tight and technical layout which should work well for the naturally aspirated boats, but having said that, just recently one of the twin-turbo machines won on a tight circuit in New Zealand, so anything’s possible.”

Whilst Mullan will be one of the undeniable favourites to win the first ever event at Keith, last time out in Temora, the sport’s most successful ever driver was beaten in a head-to-head battle with fellow Victorian Tremayne Jukes, laying the foundations for what promises to be an epic fight for the 2017 title.

“I got the taste for victory last time out, and I liked it,” Jukes admitted after his Temora victory, but despite having more than 1300-horsepower at his disposal, he admitted that Keith would provide plenty of action at the front of the field.

“Looking at data from the test day, I think Phonsy will difficult to beat. All this horsepower comes at a price – Temora was the prime example, my average throttle position for the final was at 62%, and that included a couple of nice straights to open things up, but we won’t enjoy that luxury so much in Keith.”

Whilst Mullan and Jukes will provide a focal point at the front of the field, there is no shortage of challengers for the podium, with Keith providing a clean slate for the field.

One team you could expect to shake the top of the timetables are ‘local’ favourites ‘Excalibur’. Adelaide’s Tony Giustozzi has been a ‘new’ man over the last few months, punching out some impressive laps in his 500 cubic-inch Unlimited machine, a podium finish in the opening round keeping him within sight of the points leaders. Team-mate Mick Carroll too is capable of making the podium, and in front of their ‘home’ crowd, the Excalibur team could be the dark-horses in Keith.

Discount though two-time champion Daryl Hutton at your peril. Always exciting, the New Zealander struggled in Temora with his new boat, but as a veteran of the sport, he was quickly onto the issues and is likely to present a tough contender at Keith, and like the Excalibur crew, he isn’t afraid of… well they aren’t afraid of much, so anything could happen if this trio is within reach of the top step of the podium!

Throw in reigning Unlimited Superboat World#3 Aaron Hansen in ‘Blown Budget’ the big-block V8-powered unit he shares with boat owner Glenn Roberts, and the man himself who took his machine to fourth last time out, and Victorian brothers Ted and Darek Sygidus (Frankenzstain) and you have plenty of depth in the outright Unlimited class.

Typically it doesn’t end there, with the sole ‘blue-oval’ representative in Jeremy Kincaid with his supercharged 302-Ford always in the mix, whilst for the first time in recent seasons, one of the West’s best in Nigel Johnson will make the trek across the Nullarbor for this important moment in Superboat history.

Include Queensland’s Daniel deVoigt (DEVO2) and Canberra’s Paul Burgess (Daly Transport) and you have 12 of the best Unlimited boats in the world all vying for all-important championship points across four qualifiers and three finals in front of what promises to be an impressive crowd, most of whom can be expected to be on their feet as they witness these incredible machines do battle against the clock.

Whilst the thunderous Unlimited class will provide a focal point for the fans, the tightly controlled 400-Class (also known as Group A), will be no less hotly contested.

Like the outright class, there is a new challenger shaking the tree in 400s, with recent graduate Ben Hathaway (Weapon) showing incredible pace in the ex-Brooke Avenell championship winning Sprintec from a few seasons back, Hathaway the revelation of the Temora round before an off in the final which allowed reigning champion Brett Thornton to claim top points in ‘2Obsessed’.

Hathaway and Thornton – like Mullan and Jukes – will have their work cut out for them though, with drivers like former multiple champion Mark Garlick, reigning AUS#2 Jody Ely and Queensland’s Paul Kelly likely to apply plenty of pressure, but look too to a former part-timer with an impressive new machine to throw his hat into the mix too..

A regular on the circuit over recent years, but not with his own equipment – Justin Roylance invested in an all-new machine for the 2017 season, with a powerplant and boat provided by renowned Superboat race winners JRE. Sadly for Roylance, a part failure in his engine just days out from the season opener in Temora saw the Outlaw Team Spitwater driver sidelined for the event, but a rebuild by JRE last week and subsequent test has the Forbes local fired up and looking for blood..

Like the Unlimited class there will be no shortage of podium challengers in 400s, including the returning Greg Harriman in the newly named ‘Pink Boots Racing’ team, whilst in the 350/LS Class, Series rookie Ivan Safranek will entertain the fans, not the least because of his immense ability with a hand-throttle.. Make sure you drop down and see him in the pits during one of the breaks across the event, he has an incredible story to tell.

The second round of the 2017 Australian V8 Superboat Championships will run within the annual Keith Diesel & Dirt Derby at the Keith Showgrounds, so the timeframe will also include other events on the day, with an early start on Saturday morning and two mid-session breaks for other activities. The Keith Showgrounds are located on the north-eastern side of Dukes Highway off Emu Flat Road.

Qualifying heats will begin on Saturday from 8:30am, with the finals underway after the second of the long breaks at 3:00pm.

PrevPreviousJukes is the giant-killer, defeating Mullan in Superboat final
NextJukes does it again, whilst Hathaway dominates 400sNext