V8 Superboats title battle heats up under lights at Temora 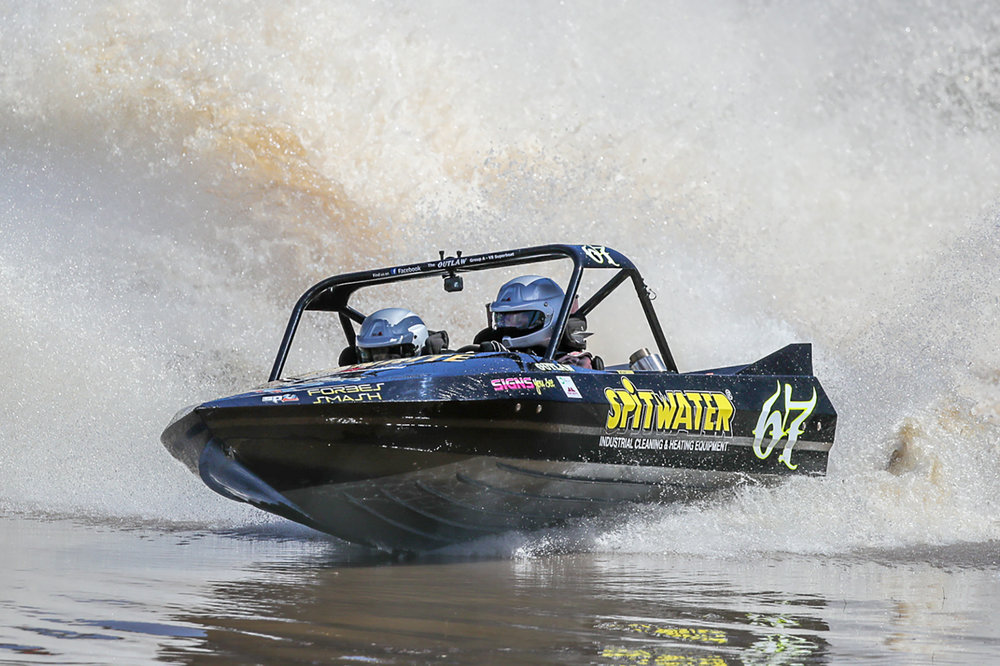 Season 2017 has provided arguably the best competition in the history of the Australian V8 Superboats championship, highlighted by a number of epic battles across both the Unlimited Superboat and 400-Class fields, and that action is expected to step up another gear under lights at Temora on 23 September.

The championship’s second visit to the popular regional New South Wales venue also signals the penultimate round of the season, and with next to nothing separating the title contenders going into the finale on the Tweed Coast in late October, Temora’s event offers an opportunity to carry a psychological advantage into that round.

For many of the fans – and for that matter, many of the teams in the pits – the big focus will be on the season-long battle between four-time – and reigning – Unlimited Superboat champion Phonsy Mullan, and his 2017 title rival Tremayne Jukes.

Jukes has led the championship points standings up until the most recent round on the Tweed Coast three weeks ago, but an electrical gremlin stalled his progress in ‘Maniac’ forcing him out of the finals for the first time all season, an opportunity which title-rival Mullan pounced on immediately, although he too failed to make the top step after suffering his own problems across the weekend.

The result of the setbacks though was that Mullan assumed the championship points lead heading into Temora, with Jukes now chasing, seven points back, although on adjusted points (teams can drop their worst point-scoring round of the year in the end of season tally), Jukes remains the points leader by six points over Mullan, courtesy of his three round wins. That puts the advantage firmly back in the ‘Maniac’ team’s court, but it also means that Jukes has to ensure two more solid rounds without setbacks, whilst Mullan will be focused solely on victory.

Both teams have been working feverishly over the last few weeks, Mullan rebuilding completely the ‘RAMJET Racing’ LS583ci naturally-aspirated powerplant, whilst across in the ‘Maniac’ camp, they have completely rewired their machine to try and eliminate all potential electrical gremlins, with both teams likely to work right up until opening qualifying to ensure they hit the water ready for battle.

Last time out at Cabarita, victory fell the way of ‘Excalibur’ pilot Tony Giustozzi, the South Australian always a contender and he will again be expected to push the points leaders in Temora. So too former champion Daryl Hutton, the popular New Zealander is still working to develop his new package for 2017 and has had a hit-and-miss season to date but is starting to see some light at the end of a very long tunnel.

Ted Sygidus (Frankensztain) too will be one to watch, the former 400-Class champion struggled last time out with a major handling issue, something which kept the Victorian off the podium. He’ll be looking to right that wrong at Temora, and try and move clear of Mick Carroll (Excalibur), Hutton, Giustozzi and Glenn Roberts (Blown Budget) in the battle for championship positions.

Paul Burgess is enjoying one of his best seasons in an illustrious career in the sport that has spanned more than two decades, the Canberra-based driver will be hoping for some more solid runs inside the top six to build on his strong 2017 championship points haul and try to move further up the order, whilst for Daniel de Voigt, Scott Krause and Darek Sygidus, they too will be hoping for a strong close to the season.

Whilst the season regulars will again provide plenty of interest for the fans, the return of a team that had been a strong title contender in past seasons – will also attract plenty of attention.

Natwel Racing’s Jamie and Cheryl Welch have not featured in the 2017 season, after a big mechanical failure towards the close of the 2016 championship. That forced a rethink by the West Australian team on their future against tough competition from the likes of Mullan, Hutton, the Sygidus brothers and the Excalibur team.

They will make their much-anticipated return at Temora and are expected to feature strongly at the top of the leaderboard with their all-new 1600bhp twin-turbo 427LSX Steve Morris Racing built V8. As one of the stars of the 2016 season before his forced retirement – Jamie Welch is hungry and looking forward to a return to the podium.

In 400-Class the championship too is wide-open, with just 16 points separating the top five boats. For points leader Ben Hathaway, the return of his primary powerplant for ‘Weapon’ couldn’t have come at a better time, having languished back down the order over recent rounds whilst the engine was repaired after a failure at the Griffith round earlier in the season.

Hathaway holds the championship lead by just a solitary point over reigning champion Brett Thornton, but on adjusted points, Hathaway is third, eight points back from Thornton, and three back from the winner of the most recent round – Jody Ely.

Ely was the undeniable star of the Cabarita event, the Victorian storming through the final to take a comfortable win over Thornton and former champion Mark Garlick, all of whom are in the title fight with Queenslander Paul Kelly.

They will all no doubt provide plenty of entertainment for the fans, with the focus for Hathaway and the pack, on reigning champion Thornton who won the opening event of the season at Temora after a technical failure thwarted Hathaway’s dominant performance through qualifying. Both those teams will be looking to assert their position in the championship at Temora, and both will be forced to keep a keen eye on Ely who impressed with his new Jetspeed hull.

Justin Roylance too will be looking for big things, the ‘Spitwater Team Outlaw’ driver considers Temora his ‘home’ circuit, and he’s shown in the past he can be a podium contender with the supportive Temora crowd cheering him on. With more development in stock by JRE, the Forbes-based driver could be the dark horse this weekend.

There will be a number of new additions to the 400-Class field making their debuts – or returns – to Temora. Clint Ruby is back in ‘Dirty Deeds’ the team having rebuilt their machine after a big off earlier in the season at Temora, they will be joined by a second team spear-headed by Shane Brennan, whilst Andrew Medicott will be making his first appearance in ‘Gone Nutz Again’.

‘Arkhum Asylum’ duo Sam Everingham and Luke Diedrich will be making their Temora debuts looking to apply what they learnt during their first season appearance at Cabarita last time out, whilst Greg Harriman and Hugh Gilchrist will be hoping to find form again in the ‘Pink Boots Foundation’ machine.

For LS-Class points leader Ivan Safranek, he will re-join the 400-Class field at Temora looking to take the fight to the faster boats, in the process cementing his position as champion-elect during his debut season of V8 Superboats.

The penultimate round of the 2017 Australian V8 Superboat Championships will be a day-night event at Lake Centenary in Temora, with gates opening at 3:00pm and qualifying rounds underway from 4:00pm. The circuit is located at Lake Centenary, 3.0-kilometres north of Temora on Barmedman Road – diagonally opposite Temora Airport.

Tickets are available at the gate, or by visiting www.afjsa.com/tickets

For those of you unable to make the event, this weekend a range of interviews and videos will be made available via www.facebook.com/V8Superboats where results and updates will also be posted, but if you live in the area, do yourself a big favour, and drop down to Lake Centenary to take in some of the action live, you certainly won’t be disappointed!