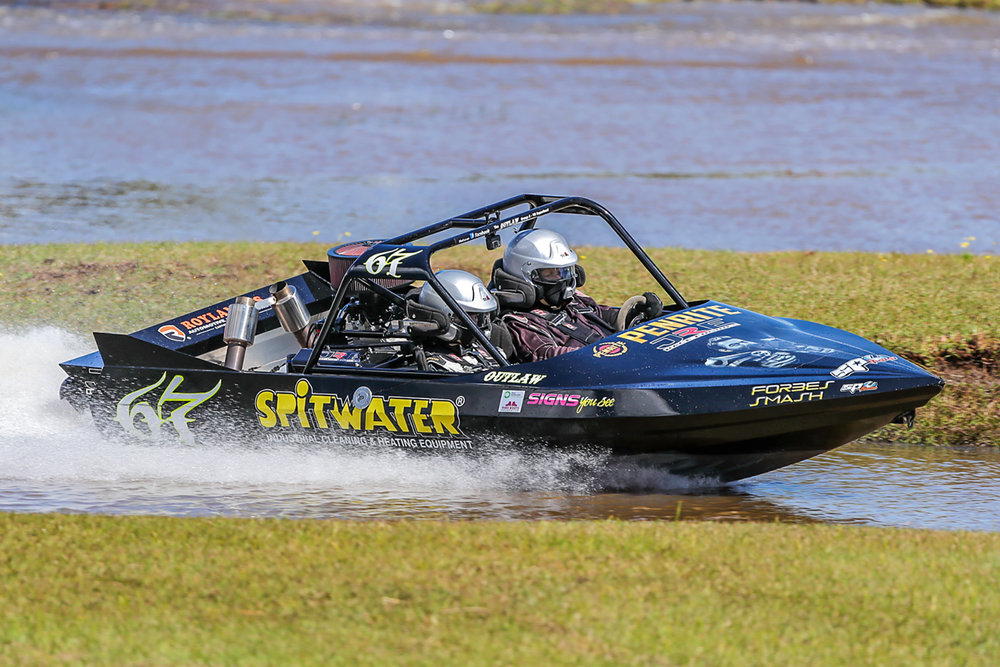 After another epic Penrite Australian V8 Superboat season the locals are well prepared for the forthcoming UIM-sanctioned World Series which will occur across back-to-back weekends in Australia, starting with the stunning Spitwater Arena at Keith in South Australia, an impressive facility where even the Australian teams have limited experience.

42-teams will line up for the first of two action-packed weekends, with a great mix of teams from both sides of the Tasman, as well as a number of entries from the USA.

New Zealand start undeniable favourites having claimed both the Unlimited Superboat and International Group A titles during the last World Series event at home, but neither champion driver will defend their title, paving the way clear for a number of new names to be etched onto the side of the much desired World Series trophy.

Coming hot off the Penrite national championship, the Australians are perhaps better placed than ever to reclaim the coveted world #1 title, a title that has so far eluded the green and gold since Slade Stanley’s second Group A title back in 2009 – the last time Australia hosted a round of the UIM World Series.

Stanley will be back in action this time around in the Unlimited class, but he will have his work cut out for him having been out of the driver’s seat for more than a year.

Whilst the awe-inspiring Unlimited teams will have the fans on their feet and glued to the live stream, the International Group A field will provide just as much action with a number of past and present champions entered in the two-round Series. Led by recently crowned Australian champion Mark Garlick, and NZ#1 Ollie Silverton the competition will be intense and both champions will have to turn in flawless drives to stay clear of their rivals, the field full of potential title contenders.

With the Kiwis already firing a warning shot on social media across the bows of the Australians ahead of the Keith round, the age-old rivalry between the ANZAC cousins begins, providing plenty of action for the fans to absorb across the coming ten days..

Both will be contenders for the world title, although Mullan will arguably be the better resourced and likely, with spare equipment should anything go sideways. He was due to debut a new boat and engine package at Keith, but a delay in the arrival of his new hull will likely see Mullan return to his tried and tested championship winning hull, although as to what powerplant the seven-time AUS#1 will campaign is a closely guarded secret.

Mullan though will have no shortage of competition from his Australian rivals, Krause expected again to be fast, but the addition of Jamie Welch, Tremayne Jukes, two-time world champion Slade Stanley, Adelaide pairing Tony Giustozzi and Mick Carroll, and two-time Australian champion Daryl Hutton powered by a new twin-turbo engine will see no shortage of podium contenders..

Welch has spent much of the 2018 season sorting the Natwel Racing machine, the West Australian suffering a few niggling issues with his new 1500bhp twin-turbo LSX unit, although the reigning world#4 will be one to watch if the team have resolved all their challenges.

For Jukes – he will be a huge wildcard, the popular Victorian who won a season-high four rounds of the 2017 Australian Unlimited Superboat championship (losing the title to two-time round winner Phonsy Mullan by just three points) is regarded as one of few drivers capable of taking the fight to Mullan. Sadly he had to move the ex-Dean Finch twin-turbo machine on to Paul Gaston at the end of last season, and looked a likely non-starter for the worlds, before a lifeline was offered by a former Australian champion.

Greg Mercier was toying with a return to the Penrite Series at some point and had prepared ‘the shark’ accordingly, however he had no intention of a return to the World Series after injuring himself last time out in New Zealand. As somewhat of a mentor to Jukes, Mercier offered the 2017 runner-up his Sprintec hull, whilst former 350-Class champion Jeremy Kincaid provided Jukes the use of his Dick Johnson Racing built supercharged 302-Ford to power ‘the shark’.

An untried package, on paper the lightweight combination of hull with 900bhp Windsor V8 on tap could be just the ticket, especially on the tight and demanding Cabarita layout.

Like Jukes, two-time world champion Slade Stanley will present the fans with plenty to cheer about, the Wagga builder campaigning a naturally-aspirated 480ci small block Chev with similar power to Jukes, the two fan favourites likely to make themselves a nuisance in amongst the more powerful twin-turbo machines.

As for Adelaide’s Tony Giustozzi and Mick Carroll.. they will persist with their naturally aspirated 510ci small block Chev and their ex-Peter Caughey Sprintec, the two most exciting drivers in the sport keen to be in the mix with the leading contenders and as one of few teams to have taken a round win in Australia outside of Mullan, Jukes and Krause over the last two seasons, could be the real jokers in the pack..

Daryl Hutton too will debut a new package for Keith, a stalwart of the supercharged powerplants over many years, Hutton has finally decided to follow the world’s leading teams by employing the services of a Farr Faster built twin turbo 400ci small block Chev, an engine with similar horsepower to his outgoing supercharged unit, but a staggering 60-kilograms lighter.. As to how the lighter engine will perform in his much revised hull will become apparent pretty quickly come opening qualifying. If the team though have nailed the setup, keep a close eye on the blue #28 American Automotive machine, Hutton loves nothing more than to upset the favourites..

Peter Caughey though is the man everyone will be focused on however, he will start the event as favourite, although the additions of NZ#2 Nick Berryman, NZ#3 Rob Coley and NZ#5 Baden Gray (supported by reigning world championship winning navigator Darryn Todd) will also add weight to the New Zealander’s side of the ledger..

Like Mullan – Caughey is as calculating as they come, the 11-time (and reigning) New Zealand champion spent some time in Australia during the Penrite Series taking stock of his rivals, whilst also making an appearance at Cabarita – the scene of the second round of the World Series – to take a look at the track first hand, taking advantage of the low water level to get a better feel for where to best place his boat come November 3.

At Keith though, very few drivers have past experience of the South Australian venue, even the Australians were faced with a different layout in 2018 than they saw during the venue’s maiden event 12 months prior.

That lack of track knowledge may play slightly into the Aussie’s hands for round one, but as any professional driver will tell you, it doesn’t take long to pick up a new circuit, although numbers could be the key..

Unlike many of the New Zealand venues, the Australian circuits feature a significant number of islands – so therefor – present a significant navigational challenge and whilst the navigators provide an essential element to the team, the intersections come up so quickly, that in many cases the drivers needs to be well ahead of where the navigator is pointing them, so both members of the team need the rotation embedded in their memories.

As an example of how tough that might be.. Keith’s World Series rotation includes 29 intersections and the six islands, so that’s a lot of work for both driver and navigator, but only a teaser for what’s to come at Cabarita around the nine islands at the Tweed Coast venue, that round will see 38 changes of direction…!

400-CLASS (International Group A)
Australia perhaps has their best chance to return to the top of the World Series points since Slade Stanley’s second world crown in 2009 with as many as ten local teams capable of making the podium.

They won’t have it all to themselves though, reigning New Zealand champion Ollie Silverton, NZ#3 Ross Travers and NZ#4 Sean Rice will ensure the Kiwis are well supported, whilst reigning USA champion Ronald Domoe will proudly wave the stars and stripes for America in his boat ‘Bad Influence’.

Garlick is a tough and determined competitor, despite his laconic, laid back appearance, the four-time Australian title holder having recently weathered an intense storm to claim the 2018 Penrite Australian title, the gritty Queenslander admitting that he is far better prepared to go after a world title this year than he was two years ago after being roundly ‘toweled’ by the New Zealanders off the back of his 2015 title.

Having taken a season off in 2016 to contemplate what had happened, Garlick returned refreshed and this year was ready to push the contenders all season long, claiming just a single win to take his second Group A title, adding to the single title taken by son Jake back in 2014 – the two of them sharing seven national titles between them.

With Jake back alongside in the ‘B’ seat, the Garlicks could prove difficult to beat, but twice the drivers – which despite meaning twice the data – means twice the wear and tear and twice the risk of incident, but they could be the ones to watch, their old ‘Tuff Tak’ hull still proving more than a match for some of the newer boats.

Sadly former 350-Class champion Brooke Lucas will miss this year’s World Series, the popular Queenslander unable to repair ‘Trouble Maker’ after a big off at Cabarita two months back, vital parts not arriving in time for the team to have the boat ready for Keith, although the experienced campaigner will no doubt be trackside to offer moral support to the Australian teams.

2017 Australian champion Ben Hathaway is another who struck trouble ahead of Keith, the ‘Weapon’ pilot suffering a similar fate to Lucas although his engine parts should arrive between Keith and Cabarita allowing him to jump back behind the wheel of the boat that took Brooke Dixon to two national titles.

Enter Matt Malthouse who had just taken delivery of the Ford powered Stinger that took New Zealander Richard Murray to the Group A title a few seasons back, the boat arriving in the country in time for Hathaway to jump behind the wheel for Keith as he endeavours to gain points towards the World Series.

With very little separating the title contenders during the Penrite Australian championship, you could forgive us for not trying to predict a likely podium, especially with the added unknowns from across the Tasman and across the Pacific, but suffice to say, there will be no shortage of action in either category, and picking a winner in the lottery might be an easier undertaking..!

For those of you unable to make the event, this weekend a range of interviews and videos will be made available via www.facebook.com/V8Superboats where results and updates will also be posted and the event live-streamed (Sunday only), but if you live in the area, do yourself a big favour, and drop down to Keith Showgrounds to take in some of the action from the world’s best drivers live, you certainly won’t be disappointed!

PrevPreviousJukes looks to ride shark to victory in UIM World Series
NextRound one goes to NZ, but Aussies want payback at CabaritaNext